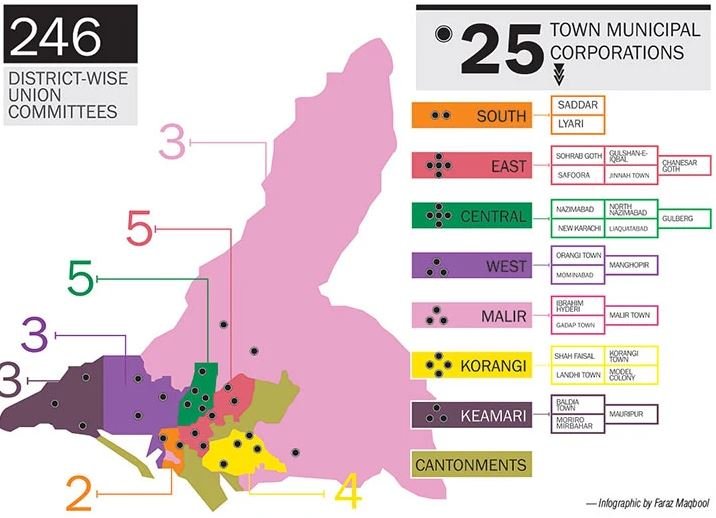 Karachi is looking to elect a mayor and council members after a gap of nearly two years, but under a slightly different local government set-up. LG elections are scheduled to take place in the city on August 28 under the Sindh Local Government Act (SLGA) 2021.

In the last elected LG the city had six districts, each with a separate district municipal corporation’s (DMC) elected council, and a Karachi Metropolitan Corporation’s (KMC) elected city council running parallel to one another.

This time round, however, the KMC council’s structure will undergo some changes, while the number of districts has also been increased from six to seven. Moreover, the districts have been divided, in terms of authority and elections, into 25 town municipal corporations (TMCs), which further comprise different number of union committees (UCs).

District East has five towns: Sohrab Goth, Safoora, Gulshan-e-Iqbal, Jamshed Town and Chanesar Goth. Jamshed Town has 11 UCs, while all the other towns are based on eight UCs. District South has two towns: Saddar and Lyari, each of which is based on 13 UCs.

District West has three towns: Manghopir has 16 UCs, Mominabad has nine UCs and Orangi Town has eight UCs. District Central has five towns: New Karachi has 13 UCs, North Nazimabad has 10 UCs, Gulberg has eight UCs, and Nazimabad and Liaquatabad have seven UCs each.

The newly carved District Keamari has three towns, of which Baldia Town has 13 UCs, Mauripur has 11 UCs and Moriro Mirbahar has eight UCs. That is to say that the city has a total of 246 UCs under 25 TMCs in seven districts.

It is also important to highlight that in the current LG set-up, all the rural areas of the city have been made part of the urban areas. According to the SLGA 2021, the city has no union council, which comprises rural areas of the city. The union councils collectively form an elected district council, which has no representation in the KMC’s city council.

An official of the Sindh government told The News that by abolishing the district council, the KMC’s city council gets representation of all the rural areas of the city as well.

The six elected representatives will then nominate councillors for the reserved seats (two women, one labour or peasant, one youth member and one non-Muslim member). All the 246 elected chairmen of UCs represent the KMC’s city council, while the elected vice chairmen will represent their respective TMC councils. Inside the city council, 33 per cent of the total 246 seats are reserved for women.

The term of the last LG led by the Muttahida Qaumi Movement elapsed while they cried foul over powers and finances. The major financial concern of the last KMC city council was its biggest source of revenue through advertisements on roads being devolved to the DMCs.

Contrary to the last LG, Section 96 of the SLGA 2021 gives the KMC overriding powers on tax levy over the TMCs. This means that where a tax is leviable by the KMC as well as the TMC, the TMC will have to relinquish its right.

In the tenure of the last LG, the mayor had no authority over the city’s solid waste, water and sanitation. This time the mayor is likely to become the divisional head of the Sindh Solid Waste Management Board (SSWMB) as well as of the board of the Karachi Water & Sewerage Board (KWSB).

According to the new SSWMB Bill 2021, which has been approved by the cabinet but is yet to be passed by the provincial assembly, there will be six divisional boards of the SSWMB: Karachi, Hyderabad, Mirpurkhas, Sukkur, Shaheed Benazirabad and Larkana. The mayors of these divisions will be chairmen of their respective boards.

The catch is that there will be a steering committee over all these boards that will be headed by the LG minister. The mayor of every divisional board will look after the operational aspects of the SSWMB, while the policy and financial aspects will be under the steering committee. The KWSB’s board is also likely to follow a similar structure.

As for the mayoral powers over the Sindh Building Control Authority and the Master Plan Department, the Pakistan Peoples Party has inked several agreements with different political parties.

The Supreme Court has also directed the provincial government that these departments should not perform any function without the approval from the elected LG. But so far there has been no legislation in this regard.