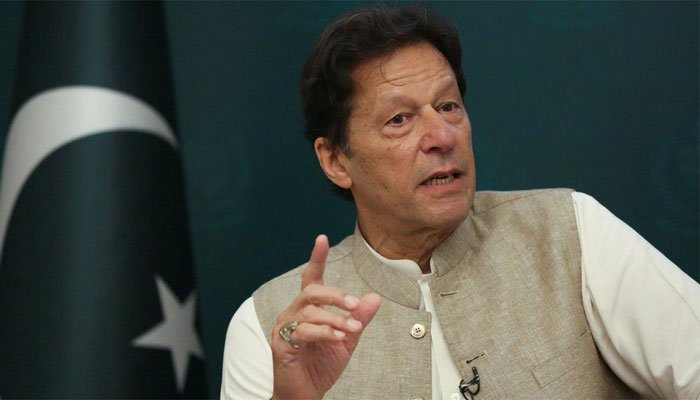 Former prime minister and PTI Chairman Imran Khan has said that the authorities are forcing his chief of staff Shahbaz Gill to say that he [Imran] told him [Gill] to make anti-army remarks that landed the latter into a sedition case he is currently facing.

“They are forcing him to say that I was the one who told him to say that,” The Guardian quoted the former prime minister as saying when asked for comments on Gill’s case.

Gill has been behind bars since last Tuesday — for inciting mutiny among the public against the army — and was hospitalised in between due to health concerns.

However, Khan claimed that his aide was targeted because he had advised army officers against obeying unlawful commands.

Speaking about Gill’s alleged torture in custody, Khan said that Gill was beaten and “psychologically broken.”

“What they’re doing to Gill is sending a message to everyone,” the publication reported Khan as saying, alleging that the authorities have scared the PTI workers as social media activists have been abducted.

Khan, whose tenure featured extrajudicial killings of dissidents and threats against journalists, said that his regime “never tried to oppress the media.”

Moreover, Khan condemned the attack on ‘The Satanic Verses’ author Salman Rushdie and described it as “terrible and sad”.

When asked for comments on the attack, Khan said that anger of Muslims towards Rushdie’s book was understandable but that cannot be taken as a justification for the assault.

“Rushdie understood, because he came from a Muslim family. He knows the love, respect, reverence of a prophet that lives in our hearts. He knew that,” Khan said. “So the anger I understood, but you can’t justify what happened.”