No objection on acquittal of PPP MPA, others, Nazim Jokhio’s widow tells court 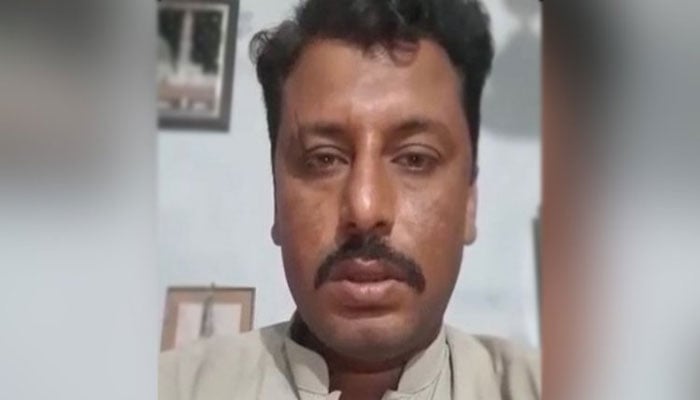 Nazim Jokhio’s widow Shireen Jokhio and the complainant of the case Afzal Jokhio, Saturday said that they would have no objection if PPP MPA Jam Awais and five of his servants were acquitted in the case.

However, during the hearing, they said that they would not forgive accused Meer Ali and Haider Ali and Niaz Salar and want them to be prosecuted for the murder.

Accused Jam Awais, who, along with his servants, is facing charges of murdering Nazim Jokhio, was not produced before a sessions court for a fourth consecutive hearing.

As Additional District and Sessions Judge-I (Malir) Faraz Ahmed Chandio resumed the hearing of the case, the held accused – Meer Ali and Haider Ali – as well as those out on bail – Muhammad Mairaj, Mohammad Saleem Salar, Ahmed Khan Shoro, Mohammad Doda Khan and Mohammad Soomar – showed up in the court. However, the PPP lawmaker was not presented by jail authorities.

A police official, Nek Muhammad, submitted a report informing the judge that Jam Awais had been admitted to a private health facility, Darul Sehat Hospital. He also placed on record the accused’s medical certificate. This is the fourth time he has not been brought to the court due to “ill health”.

They court recorded the statements of the widow of the deceased and the complainant in respect of an out-of-court settlement they have reached with the lawmaker and others.

The judge adjourned the hearing until October 28 when he would record the statement of the deceased’s mother Ms Jamiat. The court issued Jam Awais’ production order with a direction to the jail authorities to produce him on the next date.

The accused through their lawyers Wazeer Hussain Khoso and Asadullah Memon had filed applications under sections 345(2), 345(4) and 345(6) of the Criminal Procedure Code (CrPC), stating that the both parties had reached a compromise whereby the victim’s family had pardoned the accused in the name of Allah Almighty and without accepting Diyat (blood money) or any other sort of monetary compensation.

“It is prayed on behalf of the parties that this honourable court may kindly be pleased to accept the compromise and acquit the applicants in the above crime/case as the legal heirs of the deceased have forgiven the applicants in the name of Almighty Allah and do not want to proceed with the case against them further,” read one of the pleas. The affidavits signed by Shireen and Jamiat were also filed along with the applications.

The National Database Registration Authority, the station house officer of the Memon Goth police station and the relevant Mukhtiarkar have already furnished their reports about the legal heirs of the deceased in pursuance of the court’s directive.

The journalist was found dead last year in November at a farmhouse belonging to the PPP MPA. He was allegedly murdered after he posted a video on social media that showed foreigners who had been visiting the Thatta district hunting the houbara bustard. The foreigners were reportedly guests of the PPP lawmakers.