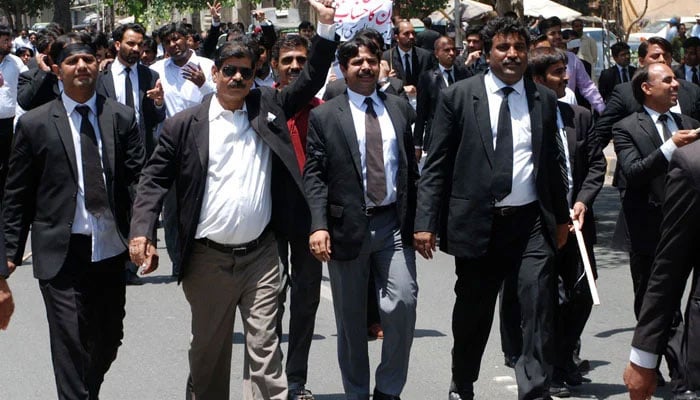 The reactions come following the announcement of a meeting of the Judicial Commission of Pakistan convened for Monday (tomorrow) to consider nominees for vacancies in the apex court.

In a joint statement, PBC and SCBA said that in the last meeting, consensus could not be evolved and some members even voted against such nominations of junior judges of high courts for their elevation. They emphasised that such nominations would demoralise other judges of the high courts and would adversely affect their judicial work, adding that this very fact is predominantly against the principle of seniority as laid down in judges’ cases.

“It is a consistent stance of the legal fraternity that the JCP should follow the principle of seniority and the practice and desire to pick and choose should be stopped for elevation to the apex court”, they said, adding if the commission again violated the seniority principle in elevating judges to the apex court, the legal fraternity will resist it with full force and zeal.

The SBC and bar associations of the province expressed their dismay at CJP’s decision to nominate only two judges from Sindh instead of three vacancies created after the recent retirement of three judges from the province.

SBC also announced a boycott of court proceedings on October 24 (Monday) all over the province in protest against the nominations of less number of judges from Sindh for elevation to the apex court.

Adopting a resolution and addressing a press conference at the SBC, PBC member Akhtar Hussain, SBC Vice Chairman Jalbani and representatives of bar associations said that at the expense of judges from Sindh, the number of judges from Punjab in the Supreme Court would go up to eight.

They said that the Supreme Court was a federal body that enjoyed exclusive jurisdiction to adjudicate disputes between the provinces inter-se, and the provinces and the federation. They said the chief justice had himself observed in the last judicial commission meeting the need for observing the informal provincial quotas and even ethnic balance within the court. They said the abandonment of that principle had created great and justifiable resentment within the smaller provinces.

They said the chief justice had once again nominated the same two judges for elevation to the apex court despite the fact they had not been approved for elevation in the July 28 JCP meeting as being an unjustifiable deviation from the seniority principle. They said that misuse of discretion shall create further controversy and acrimony and would harm the reputation of the judicial commission, the apex court and the individual judges concerned. They also criticised the out-of-turn nomination of a Lahore High Court judge for elevation to the Supreme Court.

JCP likely to meet on Monday

JCP is likely to meet tomorrow (Monday) to consider the appointment of four judges in the Supreme Court. Currently, the top court is short of five judges out of a total strength of 17.

The names of judges, who have been recommended for the elevation, include Justice Athar Minallah of the Islamabad High Court, Justice Shahid Waheed of the Lahore High Court and Justice Syed Hasan Azhar Rizvi and Justice Shafi Siddiqui of the Sindh High Court.

The last time JCP met to consider the elevation of judges, the commission opposed a set of four names by a majority of five to four, but deferred a nomination from the PHC.