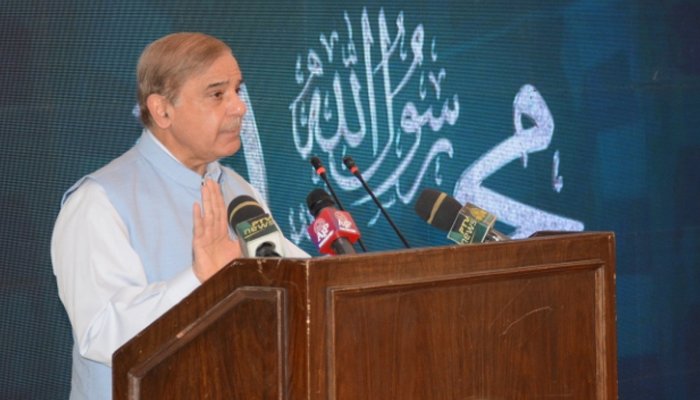 LAHORE: Prime Minister Shehbaz Sharif said Sunday that during the term of the previous regime, false allegations were levelled against political opponents, they were put behind bars, and the unity of the nation was shattered.

“Derogatory words used for political opponents were unthinkable which blew away minds,” the prime minister said while addressing a Seerat-un-Nabi conference in Lahore.

Without naming PTI Chairman Imran Khan, the prime minister questioned whether it was justified to not answer the judiciary.

The prime minister further said that the Toshakhana had become a “source of personal earning”, while rejection of law and judiciary were the common norms in the previous government.

In another attack on Khan, PM Shebaz said it should not be forgotten that people could be beguiled, but a person will be held accountable for their deeds on the Day of Judgement.

He said about 33 million people were affected by floods, but certain elements were not ready to sacrifice their politics in such a state of crisis and were even not ready to share their resources.

For transforming the country on the pattern of Riyasat-e-Madina, the prime minister is only possible by following the real essence of the teachings of the Seerah of the Holy Prophet (Peace Be Upon Him) and the path of the Prophet’s (PBUH) companions.

He said Allah had bestowed upon Pakistanis a rare opportunity in the form of an independent country so the nation should not waste it, but value the blessing of freedom.

The prime minister stressed rejuvenating the spirit of “faith, unity and discipline” to steer the country out of the present-day issues.

He observed that a welfare governance system could only be achieved under the Quranic teachings and principles of Seerah (PBUH), and highlighted the need for reforms in the governance and judicial system.

PM Shehbaz stressed that today, the nation was required to hold retrospection and evaluation of themselves under the ideals of Riyasat-e-Madina.

“Where we stand today in the realms of education and research, at the moral and social values, justice and nobility, these are the poking questions which required answers,” he said, adding how long they would confine themselves to mere traditional rhetoric.