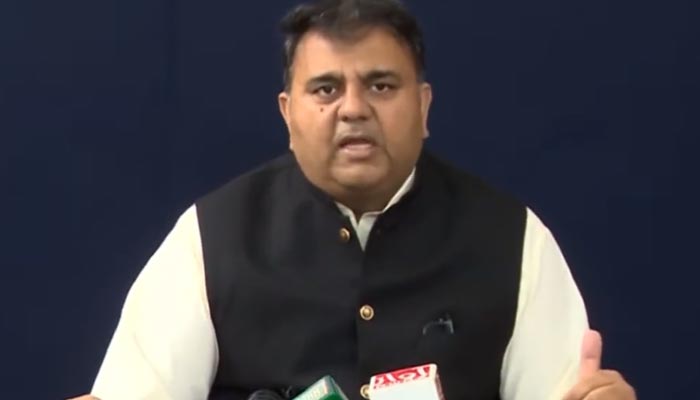 “Nawaz Sharif should disclose the details of the deal under which he is trying to come back to Pakistan,” Fawad said while addressing a press conference in Islamabad.

The PTI leader pointed out that the former prime minister never addressed the nation directly as “he has not yet gained confidence” to do that.

Accusing the coalition government of making a “mockery of our country,” he questioned who was leaking the audio clips and who will be answerable for this.

Fawad lamented that Prime Minister’s Office was in the topmost position in the country, saying that “if conversations are being leaked from there, then what kind of a country is this?”

“If this had been a civilised country, there would have been mass resignations but unfortunately, we can only see surprising changes in the state policies at present due to the change of political leaders,” he added.

“We need to respect and protect the dignity of democracy,” he said while highlighting the struggles that went into creating Pakistan.

He recalled the incidents during President Arif Alvi’s address in the joint Parliament session earlier this week. “Government allies were chanting slogans during the president’s address. Is this how a civilised nation behaves?” he questioned.

Referring to Germany’s decision to provide Pakistan €10million in flood-relief support, Fawad said: “[Foreign Minister Bilawal Bhutto-Zardari’s] personal expenses are around billion dollars and he is happy to receive a million-dollar aid from Germany.”

The former information minister lamented that, at present, there is a political and governmental crisis in the country, adding that the “kind of chaos we are witnessing today is unprecedented.”

Sharing the finding of a local survey, Fawad said that two-thirds of people in the country want immediate elections as the current provincial and federal cabinet members have failed to run the government.

“Karachi is facing so many administrative problems and we [PTI] are standing with the people of the city of ports,” he said while citing an increase in street crime as a major source of worry.

The PTI leader maintained that Karachi is being handed over to the terrorists again the PTI will condemn the move, urging the government to take care of those who sacrificed to bring peace to Karachi.

“The real heirs of the country are the public, but the current government has failed to recognise their importance,” he said, adding that the most popular leader among the masses [Imran Khan] is facing 144 cases.

Shedding light on the PTI chief’s plan on holding his long march, Fawad said that meetings are being held on the Haqeeqi Azadi.