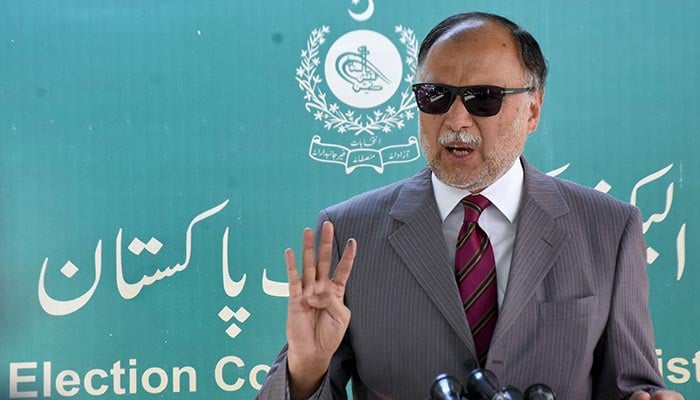 Federal Minister for Planning, Development, and Special Initiatives Ahsan Iqbal Sunday ruled out the possibility of general elections in Pakistan before August 2023 after PTI Chairman Imran Khan decided his party and allies would quit assemblies.

The former prime minister has called off his long march to Islamabad and instead announced that his party would soon be resigning from the country’s assemblies — including Khyber Pakhtunkhwa and Punjab, where the party rules.

“As far as elections are concerned, even PTI knows that early elections aren’t possible in the country as it will take around 6-8 months for rehabilitation works to complete in Sindh and Balochistan — the provinces hit hard by floods,” the minister said while speaking on Geo News’ programme “Naya Pakistan”.

Iqbal said amid all the destruction, the government can’t force the country into snap polls as this will not be a mere election of a district in Mianwali — Khan’s home place.

Flooding across Pakistan left one-third of the country under water, destroyed around two million homes and business premises, washed away 7,000 kilometres (4,500 miles) of roads, and collapsed 500 bridges — while water is still stagnant in several parts of the country.

In case the new census is out by March or April, then the Election Commission of Pakistan (ECP) will take at least four to five months for delimitation and the country will ultimately move towards polls in August.

“This is an administrative and natural timetable that might not change,” the minister said as he strongly opposed holding country-wide elections.

Iqbal hinted that the elections could be held in October as it is a Constitutional requirement to hold them during a stipulated time frame.

The federal minister asked the PTI chief to put an end to his “negative politics”, return to the Parliament, and hold negotiations with the coalition government.

“Imran Khan should partake in the [meetings of the committee for electoral reforms] if he wants to ensure that the next elections aren’t controversial,” the minister noted.

Interior Minister Rana Sanaullah — before Khan called off his march — had also asked the PTI chief to return to the assembly as democracy could not flourish if the opposition decides against holding talks.

Iqbal’s statement came after Khan — who has ended the long march — told a charged rally in Pindi that his party had decided that they would not remain a part of the “corrupt political system”, and quit all the assemblies.

Khan has called off his long march to Islamabad, but has not announced when will he quit the assemblies. Although, the PTI chief said that he would hold consultations on the date later on.

The PTI began its long march toward the federal capital on October 28 in an attempt to force the coalition government to early elections. The march was abruptly stopped on November 3 after Khan was wounded in an assassination bid.

It was later resumed from the same point but led by PTI leader Shah Mahmood Qureshi. Khan then joined his supporters a day earlier, when he called off the march.

Following Khan’s announcement to call off the march, leaders from the ruling coalition — including Foreign Minister and PPP Chairman Bilawal Bhutto-Zardari, Sanaullah, and Iqbal — criticised the entire campaign and termed it a “flop show”.