ECP, in connivance with Hamza, tried to defeat us in by-polls: Imran Khan 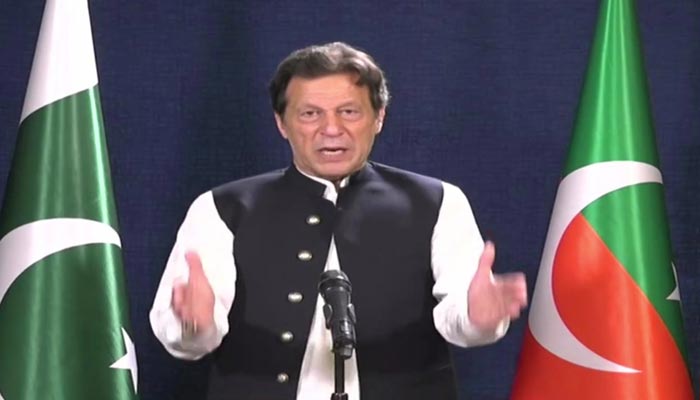 ISLAMABAD: PTI Chairman Imran Khan Wednesday claimed that the Election Commission of Pakistan (ECP), in connivance with PML-N leader Hamza Shahbaz, tried to defeat us [PTI] in the Punjab by-polls.

In a televised speech, Khan said that they [coalition government] “disrespected the public” by considering them “sheep and goats” and tried imposing “corrupt people” on them.

The former prime minister recalled that when the PTI announced its “Azadi March” on May 25, “they [coalition government] made all efforts to create hurdles for the families that came out to support the Haqeeqi Azadi.”

“Today, I want to thank the Almighty that despite all the impediments, people came out to show support rather than staying at home out of fear,” he said, adding that he was glad that the people of Pakistan started becoming a nation now.

“Throughout my life, I have witnessed such enthusiasm only once before and that was during the 1965 war; at that time, everybody thought that the nation was fighting. And now, I saw the same enthusiasm among the masses during the by-polls in the 20 constituencies of Punjab,” he said.

Khan further elaborated that all-out efforts were employed to defeat the PTI in the by-elections. “First of all, Hamza was illegally imposed on us,” and even when he was ordered by the top court to refrain from using any state machinery and administration for personal gains, he used all of the aforementioned to rig the elections.

Accusing the ECP of supporting Hamza, he said: “The election commission also tried to defeat us by helping PML-N during the by-polls.”

Terming his party’s win a “miracle”, he said that despite the government’s attempts, the PTI managed to win because of the people who came out to cast their votes. “A new history is being written,” he said.

‘US dollar strengthened by Rs53 in three months’

The PTI chairman said that all economic indicators of Pakistan showed that the economy was growing significantly during PTI’s tenure, saying that the Economic Survey 2021-22 showed that such growth was witnessed after 17 years.

Highlighting the relief packages announced by his government — including the health card initiative — Khan said the efforts of the party were leading the county towards a welfare state.

“The question, however, remains the same: When the country was running well, then why was the conspiracy allowed despite knowing the long-term effects?” he questioned the authorities — which according to him — could have stopped the conspiracy.

Sharing his solution to the problems of the country, he said that there was only one way to come out of the crisis. “A new election commission should be formed to conduct transparent elections,” he said, adding that Electronic Voting Machines (EVMs) could have stopped rigging as results are announced as soon as polling ends and “it can stop 130 methods of rigging.”

Khan acknowledged that the current situation was difficult and added that “the longer this coalition government stays in power, the more it will get difficult for the people [to survive].”

Regarding yesterday’s Supreme Court verdict, he said all the “thieves” were criticising the apex court as they consider themselves above law.

“They think that law is for the common people only,” he maintained, adding that during the by-polls, the rangers and police shelled our people, “despite their conscience telling them that this was wrong, they feared losing their jobs and toed the line.”

“In the last 26 years, they levelled all sorts of allegations on me and resorted to character assassination,” he lamented, emphasising that the country needs to become self-sufficient.

“It is better to die than be a slave as society suffers when thieves are in power,” he emphasised.