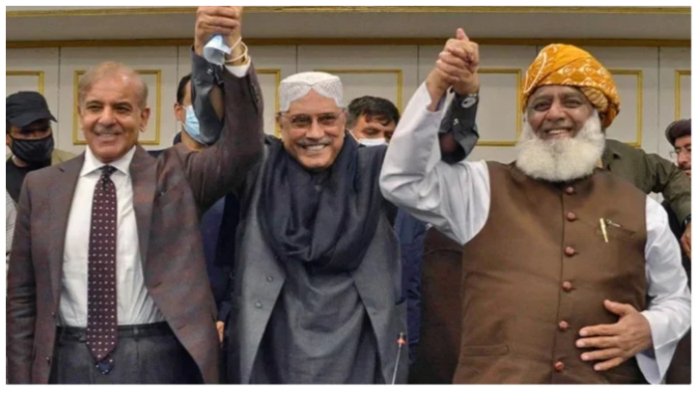 ISLAMABAD: The coalition government and parties of the Pakistan Democratic Movement (PDM) Sunday decided to file a petition to the Supreme Court of Pakistan, seeking the formation of a full bench to hear the case related to the Punjab chief minister’s election.

The country’s top court will hear the petition filed by the PTI against the ruling of the Punjab Deputy Speaker Dost Mazari during the election of CM Punjab.

At the time of the voting process, Mazari, citing Article 63(A) of the Constitution, had rejected 10 votes of PML-Q members. As a result, PML-N’s Hamza Shahbaz was able to retain his post as the chief minister after defeating PTI’s candidate Pervez Elahi with three votes.

Unhappy with Mazari’s decision and terming it “unconstitutional and illegal,” the PTI had approached the apex court in this regard.

According to Geo News, in the petition, the government and its allies will demand the formation of a full bench to hear the case in relation to the election of the province’s CM, the revision petition of the Supreme Court Bar Association (SCBA), and related petitions together.

Aside from PML-N, PPP, and JUI-F, petitioner parties include MQM-P, ANP, BNP, and BAP, among others.

In this regard, Law Minister Azam Nazeer Tarar said that there was no mala fide intent involved in the demand to form a full bench.

“I am not demanding the formation of a full court with any kind of mala fide intent. This case will have far-reaching consequences on future politics,” said the law minister, adding that 220 million people’s votes should not be violated.

“MPAs are liable to vote on the instructions of the party chief. The matter is so serious that the decisions given in 2015 and 2018 will also be violated,” said Tarar. The court should hear the full court’s demand seriously, urged the minister.

“Last time, 25 of our votes were removed. This decision was made by the judges included in the same bench,” said Tarar.