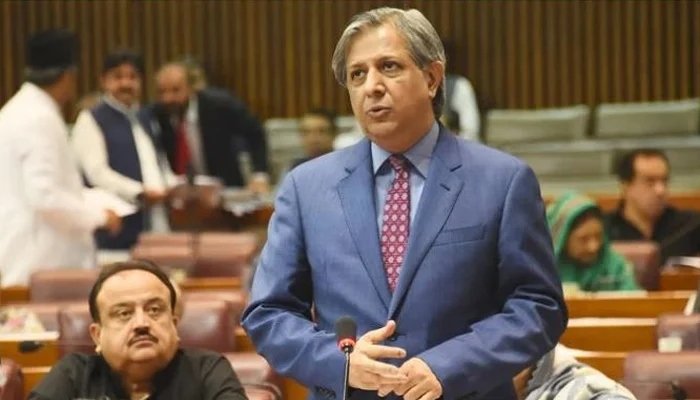 During a press conference in Lahore flanked by Punjab Home Minister Attaullah Tarar, the law minister defended Punjab Assembly Deputy Speaker Dost Mazari’s ruling of rejecting 10 PML-Q votes under Article 63(A) during the election of CM Punjab and termed the move “legal and constitutional”.

The minister also stated that the same night, Elahi had submitted a petition to the Supreme Court but the doors of the apex court’s Lahore Branch Registry were opened even before the petition was finalised.

“The Supreme Court did not take notice of PTI workers jumping the walls of the registry and entering its premises,” said Tarrar.

He then repeated the coalition government’s demand that a full court be formed to hear the plea filed by the Punjab Assembly speaker on the chief minister’s elections.

“A full court should be formed considering the importance of the case. Every section of the society is demanding a full court,” said the law minister. He added that even five former presidents of the Supreme Court Bar Association  (SCBA) have called for the formation of a full court.

The minister said he was hopeful that Chief Justice Umar Ata Bandial would keep the demand in mind when he resumes the hearing tomorrow. Referring to Article 63(A), he added that two interpretations of the same case cannot be made.

“SC’s five-member bench gave a 3-2 decision. Three judges said that vote of the dissident members will be cast but not counted. According to the decision of the three judges, the dissident member will also be unseated,” said Tarrar. However, he added that he would not comment on the matter of unseating the PML-Q members as it was between Chuadhry Shujaat and his MPAs.

The minister also clarified that his colleague Food Security and Research Minister Tariq Bashir Cheema, who is from the PML-Q, told him that the MPAs were verbally informed of PML-Q President Shujaat’s decision and a letter was also sent to them via TCS.

He further said that Shujaat had given clear instructions to PML-Q members to vote for Hamza Shehbaz, saying that the party chief has unlimited powers.

“I am not demanding the formation of a full court with any kind of mala fide intent. This case will have far-reaching consequences on future politics,” said the law minister, adding that 220 million people’s vote should not be violated.

“MPAs are liable to vote on the instructions of party chief. The matter is so serious that the decisions given in 2015 and 2018 will also be violated,” said Tarrar. Court should hear full court’s demand seriously, urged the minister.

“Last time, 25 of our votes were removed. This decision was made by the judges included in the same bench,” said Tarrar.

He also said that PTI’s parliamentary leader Asad Umar, in his letter, had stated that votes should be cast for Elahi on the instructions of Imran Khan.