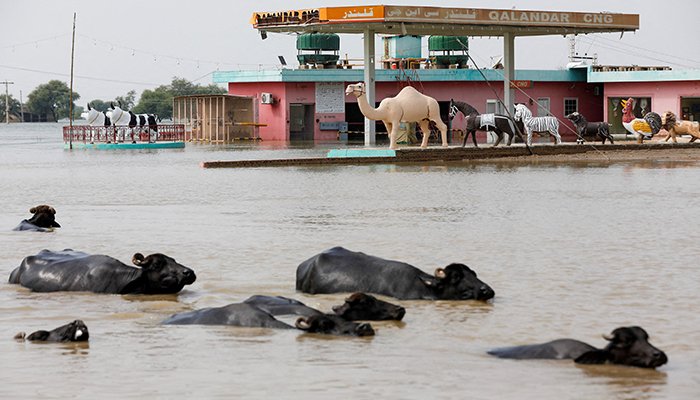 LONDON: The torrential monsoon that has submerged more than a third of Pakistan was a one in a hundred-year event likely made more intense by climate change, scientists said on Thursday.

In the hardest-hit areas of Sindh and Balochistan provinces, where August rainfall was seven to eight times heavier than usual, climate warming made average five-day maximum rainfall about 75% more intense, according to a report by World Weather Attribution (WWA), an international research collaboration that teases out the role of climate change in extreme events.

Across the entire Indus River basin, the scientists found maximum rainfall was about 50% heavier during a two-month monsoon period due to climate change.

They used 31 computer models in their analysis, combined with real-world observations.

WWA previously analysed the deadly heatwave that scorched India and Pakistan in March and April, with temperatures reaching 50°C. Climate change, they said, had made that heatwave 30 times more likely.

Their findings were less concrete for Pakistan’s heavy rains.

“The role of climate change in heatwaves is much larger than in extreme rainfall when it comes to likelihood,” said WWA co-leader Friederike Otto, a climate scientist at Imperial College London.

It’s also trickier to parse out the role of climate change in the Pakistan floods, scientists said, because there have been so many drivers behind this year’s extremes.

Ongoing La Nina conditions — a global weather pattern that can affect ocean temperatures — combined with a negative dipole in the Indian Ocean — whereby rainfall is heaver in the eastern Indian Ocean – have been feeding the monsoon.

The floods have so far claimed the lives of more than 1,500 people and displaced millions, washing away roads, homes, and farmland. Damages are expected to total more than $30 billion.

Pakistan authorities say it could take up to six months for flood waters to fully recede, spiking concerns about waterborne diseases such as dengue and cholera.

While climate change may have made this year’s monsoon rains worse, the devastation they caused can’t be attributed to warming alone.

Scientists stressed the construction of homes and agricultural land on known flood plains, as well as inadequate infrastructure such as dams, had worsened the impacts of heavier rains.

“There have been significant drainage problems in the lower Indus Basin, even in non-flood years,” said geographer Ayesha Siddiqi at the University of Cambridge.