We do not want to see anyone disqualified, says Shahid Khaqan Abbasi 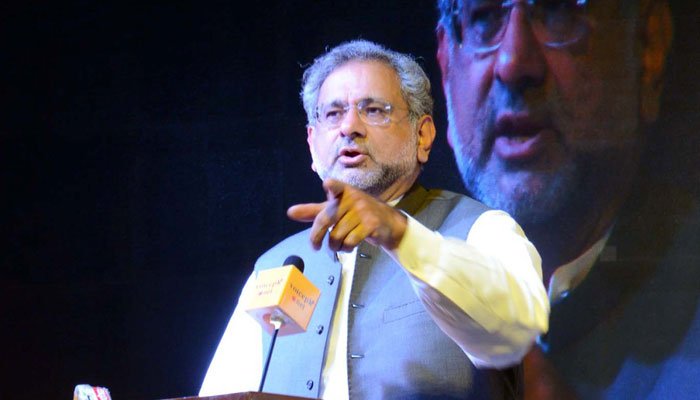 KARACHI: Hours before the Election Commission of Pakistan’s verdict in the Toshakhana reference against PTI Chairman Imran Khan, PML-N leader Shahid Khaqan Abbasi said that they do not want to see anyone disqualified from politics.

“We do not want to see anyone disqualified. Competition in politics should be on the ground,” said the former prime minister while talking to the media in Karachi.

The PML-N leader was in the port city to appear before an accountability court in the reference filed against him by the National Accountability Bureau on the illegal appointment of the former managing director of Pakistan State Oil. The court has adjourned the hearing till November 25 without any proceedings today.

In an apparent reference to Imran Khan’s statement who said that backchannel is open, the former prime minister said that backdoor talks have always led to failures.

On the new army chief’s appointment, the PML-N leader assured the reporters that the Shehbaz Sharif-led government would appoint General Qamar Javed Bajwa’s replacement before November 29 — the day of retirement of the incumbent army chief.

“Army chief himself has said that he does not want an extension. This is a good tradition that he has announced himself,” Abbasi told the media. He added that the next chief’s appointment was a routine matter and should be done on time.

Talking about his case, Abbasi lamented that it is the third year that he is appearing before the court in this case yet there has been no progress, so far.

The former PM said that the National Accountability Bureau has “paralysed people’s lives”.

“Will NAB be able to compensate the loss of these people?” asked Abbasi, adding that people went to jail and had to close their businesses.

The PML-N leader also wondered if former NAB chairman Javed Iqbal can share the details of his assets. Those who keep putting others in jail without charge are unable to share their assets, he said.

“I have been saying from the beginning that NAB should be abolished. The Supreme Court should see what NAB has done in 30 years,” said the PML-N leader.