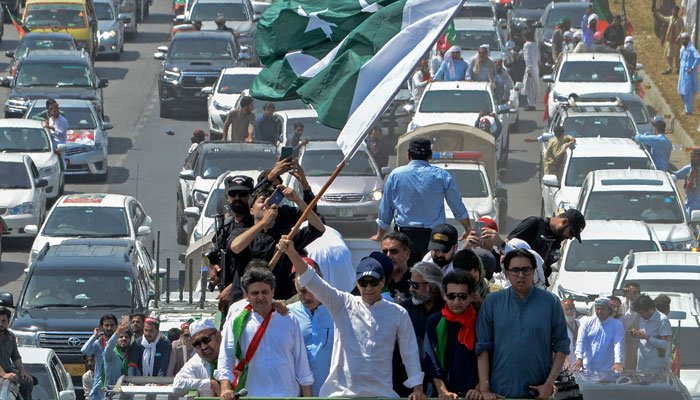 ISLAMABAD: PTI Chairman Imran Khan has given a 72-hour deadline to his team to ensure that his container for the long march to Islamabad is ready by Sunday, reported The News.

The publication, citing PTI sources, reported that the container is being renovated in Sector G/8-4 near the party’s secretariat in Islamabad. The party has asked for the installation of air conditioners, fans, air coolers, LED, toilets and even heaters in the container.

A fence will guard the container.

On the other hand, the Islamabad district administration has seized over 700 containers to counter the ‘Azadi March’.

The capital police said they will manage around 1,100 containers to seal the capital off during the long march. Out of the total, 525 containers have been placed at 22 different roads.

The PTI chairman has been rallying his supporters and workers to get ready for his march to Islamabad. However, he is yet to share a date for the long march.

This would be the PTI chief’s second long march towards Islamabad after being ousted from the prime minister’s office via a no-confidence motion.

The government has been warning the PTI from coming to Islamabad and has vowed to deal with Imran Khan’s long march with an iron fist.

The government has also approached the Supreme Court with a contempt plea against the PTI chief for his long march.