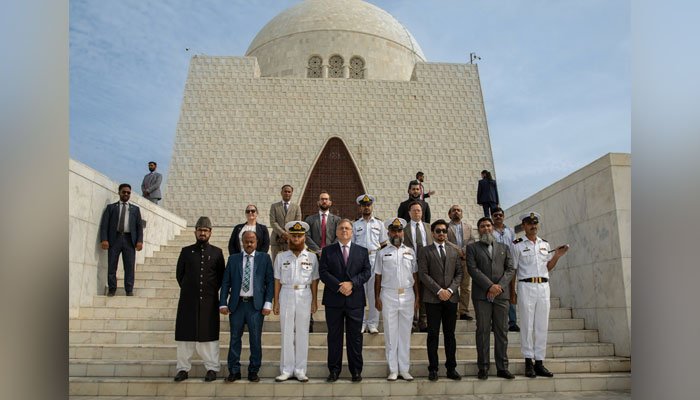 The United States shares the Quaid-e-Azam’s vision of a Pakistan of religious tolerance, economic prosperity and social inclusion and that is at peace with itself and its neighbouring countries, says US Ambassador to Pakistan Donald Blome.

“It was a great honour for me to be at the Mazar-e-Quaid to pay respects and commemorate his legacy,” Blome said.

Later, he visited the mausoleums of Liaquat Ali Khan, Pakistan’s first Prime Minister, and Fatima Jinnah, Jinnah’s sister. He toured the adjoining museum and admired the artefacts related to the life of Quaid-e-Azam Muhammad Ali Jinnah.

“This year marks 75 years of bilateral relations between the United States and Pakistan. The United States values our long-standing cooperation with Pakistan and has always viewed a strong, prosperous, and democratic Pakistan as critical to US interests,” Blome was reported as saying by The News.

We support strengthening economic ties between our two countries by expanding private sector trade and investment, which benefits both countries, he said, sharing examples of cooperation such as the US donation of more than 77 million COVID-19 vaccine doses to Pakistan, including 16 million paediatric vaccines recently pledged in Washington.

He said this contribution is part of their ongoing solidarity with the people of Pakistan as they confront the devastating pandemic and is among the largest donations from the US to any country worldwide.

“In addition to vaccine doses, since the beginning of the COVID-19 pandemic, the US government has provided nearly $70.4 million in direct support and $13.8 million in in-kind support to assist the Pakistani people in the fight against COVID-19. An additional $20 million in USAID funding is also planned to support vaccination efforts in Pakistan,” he said.

“Our trade relationship with Pakistan has helped both Pakistani industries and consumers. The US continues to be Pakistan’s top single-country export destination. Also, in the last fiscal year alone, US direct investment in Pakistan increased by 50%, and is now the highest it has been in over a decade. US agricultural exports to Pakistan have grown from $287 million in 2014 to $1.3 billion in 2021,” Blome shared.

He said the US has supported the addition of more than 4,000MW of clean energy capacity in Pakistan, enough power for more than 47 million Pakistanis.