US envoy calls on Punjab CM, agree to boost partnership in various sectors 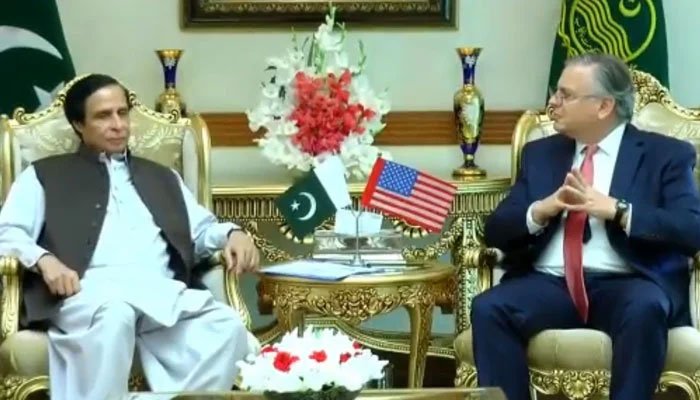 LAHORE: US Ambassador Donald Blome and Punjab Chief Minister Chaudhry Parvez Elahi have agreed to promote cooperation between the US and Pakistan in the areas of population planning, alternative energy, agriculture, and water management.

The US ambassador called on the Punjab CM at the Chief Minister’s Office on Wednesday and discussed matters of mutual interest. The CM said the Punjab government welcomes the US collaboration for drug eradication.

The CM briefed the ambassador about public welfare initiatives and legislation for drug-free campuses. He also thanked the ambassador for assistance to Pakistan during the coronavirus pandemic.

The CM stated that Pakistan attaches a high value to its relations with the United States. Reforms are being implemented in various sectors, and technical assistance from the US would be highly appreciated in this regard, he noted.

According to Elahi, the recent legislation will be enacted to rid educational institutions of drugs, and the US’s assistance will contribute to this.

A special anti-narcotics force will be set up and those who provide information about drug dealing on the campuses will be rewarded, said the CM. Special courts will also conduct daily trials of drug dealers, he said.

The government had restarted the channelization of Koh-e-Suleman water, with small dams being built. A plan has been put on the anvil to build two large dams on the Chenab River.

He hoped that the US assistance in connection with research and development would be beneficial in terms of increasing agricultural productivity. He hoped that cotton production would increase significantly as a result of US assistance.

Ambassador Donald Blome said his country highly values its relations with Pakistan, particularly the cooperation with the Punjab government.