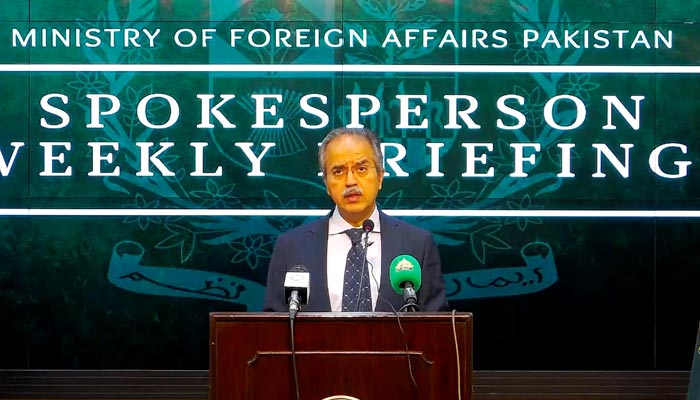 ISLAMABAD: The Foreign Office clarified Friday that the master copy of the US cypher — a copy of which has apparently disappeared from the Prime Minister’s Office — was “safe and secure”.

The federal cabinet had formed a committee last month to investigate the diplomatic cypher that it was told had been “stolen” from the records of the PM House, with PTI Chairman Imran Khan also saying that he was unaware of the document’s location.

“It is very evident that these documents are handled, and are present in the Foreign Ministry, in a proper, safe and secure situation,” the ministry’s spokesperson, Asim Iftikhar, said during a weekly press briefing.

PTI Chairman Khan had brandished a “threat letter”, which was the cypher, on March 27 at a public gathering before his ouster, claiming that his government had been threatened by the US and the then-opposition was involved in the conspiracy.

Despite Khan’s repeated allegations of the cypher linked to his ousted, both — the government and the United States — have rejected the former premier’s claims as “baseless”.

Purportedly audios related to the cypher have also come to the fore and in one of the soundbites, the PTI chairperson can also be heard telling his party leaders to “play with it” for pushing their narrative.

Pakistan’s relations with other countries

In response to a question about Pakistan’s relations with other countries due to the ongoing political situation, the spokesperson rebutted reports of Islamabad’s ties deteriorating with global powers and friendly countries.

“I think you would have noticed the conduct of foreign policy, the way the engagements are taking place — with the major powers, with the region, with our traditional partners, and also beyond, regions with which we want to enhance our cooperation and partnership,” he said.

Iftikhar said it is very evident that there is a “positive, forward movement”; there is improvement and further strengthening of bilateral relations and cooperation with a host of countries.

“That is evident from the series of interactions, the various visits and meetings that are taking place, the intense diplomacy that you have observed in the last couple of months,” he added.

Political uncertainty gripped the country since April when Khan was ousted from power as he has been holding repeated rallies and plans on staging another long march to Islamabad in the coming days.