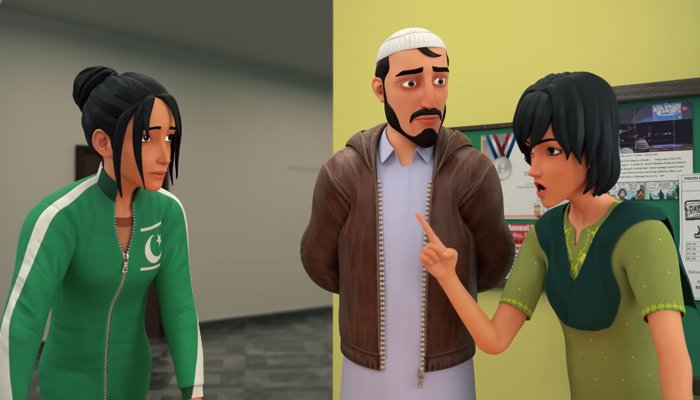 If you haven’t checked out the latest episode of ‘Team Muhafiz’, let us warn you in advance — you’re headed for a roller coaster ride as this episode certainly ups the ante as far as elements of action and thrill are concerned.

The episode begins with Team Muhafiz members taking directives from Farman on how to handle security at a hockey stadium in Karachi. Today is a big day for Pakistan, and even bigger so for our heroes, who have to be on their guard as the German women’s hockey team is taking on Pakistan in a championship final.

Parinaaz is busy captaining the side and being the awesome goalkeeper we all know her to be. Meanwhile, Rawka isn’t sitting idle either. He’s dispatched his goons, and we know they’re about to do something really bad.

The fans arrive to catch the action and our heroes oversee security. However, Rawka’s goons successfully make their way into the stadium’s basement (after hacking the power system at the stadium and turning off the floodlights) and unknown to everyone, plant a bomb in the basement.

Our heroes (minus Parinaaz who’s on the field for the final) our heroes arrive just in time to crash the party, and beat Team Rawka’s behinds black and blue. They save the day, again, as a Bomb Disposal Unit (BDU) arrives to dismantle the bomb. Simultaneously, Parinaaz saves a penalty stroke to hand Pakistan a hard-fought victory over Germany.

It’s not a good day for Rawka and the police arrive, slapping the handcuffs on him. However, the episode ends with a twist as someone intercepts the police van taking Rawka to prison and breaks him out.

We find out it is none other than Farman, the man running Team Muhafiz.

What’s in store for Saturday, when Team Muhafiz returns to our screen? Why did Farman orchestrate Rawka’s release from custody? Should viewers get ready for another twist?

We know there’s only one way to find out!