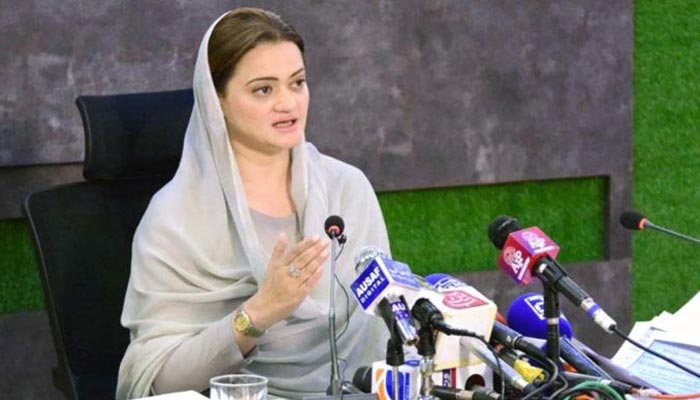 ISLAMABAD: Information Minister Marriyum Aurangzeb on Saturday fired a broadside on PTI Chairperson Imran Khan for trying to sabotage democracy, China Pakistan Economic Corridor (CPEC), and the national economy in exchange for the foreign funding received by the party.

Addressing a press conference in the federal capital, the information minister said: “A conspiracy project, launched by Imran Khan, was executed in the country through the foreign funds received by his party during different periods including 2008-2013, 2013-2018 and 2018-2022.”

Khan tried to weaken the parliamentary system and democracy in 2013 under the project which came into effect in 2008, said Aurangzeb, adding that the PTI chief incited his workers to attack the Supreme Court’s building, launched a civil obedience campaign, and made attempts to halt the CPEC by bringing political stability in the country.

“These were the milestones, delivery points and commitments which Khan made to his funders in exchange for the foreign funding,” she said.

She went on to say that the nation needed to look into the reasons behind the “Imran project” under which Kashmir was sold, CPEC projects stopped and the country registered negative economic growth.

“Imran Khan, during his government, rendered the youth jobless, created anarchy and political instability and imprisoned the media persons,” added the information minister.

Aurangzeb said that the nation had to understand that Khan was responsible for the current crises — which were created to fulfil the commitments he made with the foreign fosters.

Talking about the foreign funding case, the PML-N leader said that the Election Commission of Pakistan (ECP) — through its verdict — exposed the “so-called truthful and honest Imran Khan before the nation”.

The minister said that Khan was trying to mislead the nation by consistently telling lies over a case that was investigated by the ECP for eight years.

“The PTI sought 51 adjournments, changed nine lawyers, and filed 11 petitions with the court seeking delay in the announcement of the decision and an order to refrain the ECP from making foreign funding details public,” she added.

She said the PTI chairperson had “knowingly” and “willfully” received prohibited funding from a number of foreign firms and individuals, which he acknowledged by himself with the false affidavits he submitted in the ECP five times.

“Khan blamed others for corruption, but when his theft came to the fore, he tried to give it an angle of technicality. He became naive about the funding of his party and termed it a technical matter,” added the PML-N leader.

Criticising the PTI leader, Aurangzeb said that it is not a technical matter and that the Imran Khan-led party concealed the bank accounts in which the money was received from abroad.

“This is a matter of misappropriation as Khan used donations for political and personal purposes,” she said, noting that the PTI opened undeclared bank accounts in the name of the party’s secretariat employees.

The people, she highlighted, needed to understand that it was not a matter between the PTI and PML-N, but rather between the former, the State Bank of Pakistan and the ECP. She further said that the case was filed by its own member Akbar S Babar and the PML-N had nothing to do with it.

The minister said Khan remained a major hindrance in the foreign funding case’s proceeding as described by the ECP in its decision as “the worst abuse of law had happened.”

Berating the PTI chief, Aurangzeb said that the funds he received as charity from overseas Pakistanis, for flood relief activities and other natural disasters, were spent on his personal and political purposes.

She added that the senior leadership of PTI including Khan were signatories of the funds received by his party in the undeclared bank accounts.

“Till this day, Khan has not denied that he did not receive money from Romita Shetty and Wootton Cricket Limited,” she said, slamming the PTI for posting fake interviews of overseas Pakistanis, who claimed themselves as its funders on its social media accounts.

She dared Khan to post the interview of Arif Naqvi and other foreign nationals and firms’ members who sent dollars, pounds and other currencies as funds to his party.

“Arif Naqvi was presented as a front person to conceal the real identities of other foreign sources,” she added.

Aurangzeb said the PTI had disclosed the names of the front persons who collected the funds from the different countries. Their videos were on the record, she added.

Khan never informed the ECP that he received funds in the accounts of his party secretariat’s employees including Muhammad Arshad, Tahir Iqbal, Muhammad Rafiq and Numan Afzal.

She said the funds were also received in the personal accounts of other PTI leaders including Asad Qaiser, Imran Ismail, Shah Farman, Saifullah Niazi and others. In this case, Imran Khan and finance board’s members were co-signatory of these accounts.

The minister also mentioned the names of some foreign funders including Mukesh Kanda, Charn Jeet Singh, Charles, Michael and others. Ironically, his party continued to receive the funding, but Imran Khan did not know, she added.

Aurangzeb further said the PTI chief also made money by committing massive corruption in Malam Jabba project, wheat and sugar exports, BRT Peshawar and others, adding that Khan launched the regime change narrative to cover up his corruption through which Bani Gala was transformed in “Money Gala.”

“Enough is enough, now this drama must come to an end as a foreign agent has been nabbed and the PTI has been declared a foreign-aided party,” she said.

‘Relief activities for flood-hit areas being carried out effectively’

The information minister also appreciated the media for consistently sharing the flood situation with the government which helped carry out the rescue and relief activities in an effective way.

She said the premier had ordered the National Disaster Management Authority (NDMA) and other relevant departments to start relief and rehabilitation immediately as the finance division had been directed to transfer Rs5 billion to the authority.

Condemning the social media campaign against the Pakistan Army by alleged PTI trolls, Aurangzeb said that “this reflects the mindset of Imran Khan and his wife Bushra Bibi.”

“This behaviour has caused embarrassment among us,” said the minister, adding that the martyrs were helping the people affected by the flood in Balochistan and this kind of hatred, provocation, and deceptive behaviour is condemnable.