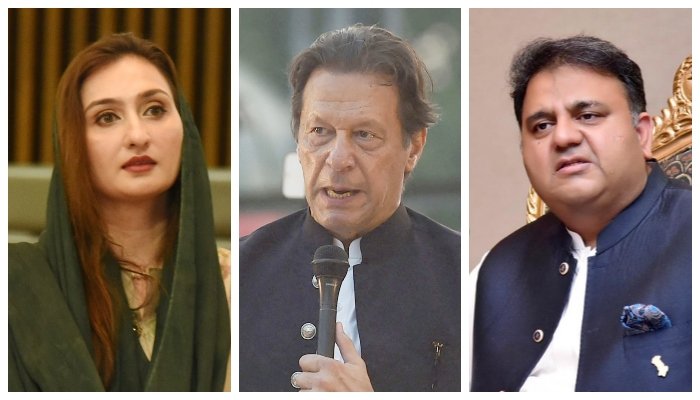 LAHORE: Reacting to the acquittal of Prime Minister Shehbaz Sharif and his son Hamza Shahbaz in the money laundering case, PTI on Wednesday termed the development a “slap in the nation’s face by the judicial system”.

Commenting on the special court’s decision, PTI Chairman Imran Khan told a gathering in Sharaqpur that PM Shehbaz and Hamza’s acquittal has covered up their theft worth billions of rupees.

In a tweet, PTI Senior Vice President Fawad Chaudhry said that the allegedly laundered “Rs24 billion have been passed over for the father-son duo”.

“On one hand, [they] are seeking funds for flood victims. On the other hand, one family has looted billions of rupees,” Fawad said, adding that the laundered money belonged to the people of Pakistan.

Taking a jibe at the court’s decision, another PTI leader Maleeka Bokhari tweeted that the “country’s major criminals” and “convicted thieves” have been “respectfully acquitted” today.

While PTI’s Parliamentary Leader in Sindh Khurrum Sher Zaman stated that he was not surprised at the acquittal of PM Shehbaz and Hamza.

“The prosecution’s strings are in the hands of the imported government. We could foresee their purpose of coming into power,” he tweeted, adding that the resignation of the Federal Investigation Agency’s Director General and the absence of a witness is the actual sign of favouritism.

Earlier, Special Court — Central, acquitted PM Shehbaz and his son Hamza in the Rs16 billion money laundering case lodged against them by the FIA.

The court announced its judgment in the case against the Shehbaz family after the FIA prosecutor informed the court that no money was directly deposited in the accounts of the father-son duo.

The Sharif’s — who were summoned today — did not appear before the court as their counsel filed a request for exemption following PM Shehbaz’s busy schedule and Hamza’s ill health.

The court acquitted the premier and his son after the FIA — last week — had cleared the PML-N leaders on the charges of laundering Rs16 billion, as there was “no direct evidence” against the father-son duo.