Imran Khan tells workers to gear up for long march 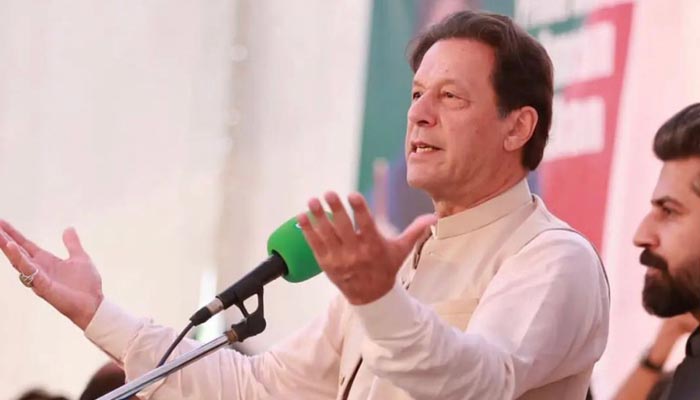 LAHORE: PTI Chairman Imran Khan Wednesday told his supporters to gear up as he could give a call for the anti-government long march to Islamabad at any moment.

Speaking at the Insaf Students Federation’s (ISF) convention in Lahore, the PTI Chairman said: “It won’t take long now. You should remain prepared every day for my call.”

In his bid to up the ante against the government, Khan has been holding repeated rallies and gatherings across several cities in Punjab and Khyber Pakhtunkhwa.

Seperately, during his party’s election campaign for PP-139 in Sharaqpur, Khan said that the election is a part of Pakistan’s struggle for “Haqiqi Azadi”.

“At this time, massive thieves have been imposed on our country,” the PTI chief said, adding that the nation’s money is stolen through corruption.

Khan said that politicians go abroad to make deals and then return. The former premier added that the nation’s tax money goes into repaying debt instalments.

“For corruption, they destroy institutions which hamper theft. They destroyed NAB’s law,” Khan said, adding that the nation cannot get hold of “thieves” who send money abroad.

Speaking about his recent brush with the “prohibited funding” case, the PTI chief claimed that the government is trying to get him disqualified.

PTI chairman asked for an investigation regarding the cypher which, according to him, was part of the conspiracy to topple his government in April.

“Whenever the cypher is probed, it’ll inform the nation that Imran Khan rejected slavery,” he said, adding that he neither wanted to steal nor conceal his corruption.

Khan said that he didn’t want his own judge, IG, army chief or the head of NAB.

“I want to bring people on merit who can help the country and strengthen institutions,” the former PM said.

Speaking about the audio leaks, Khan alleged that his phone was being taped when he was the prime minister.

“I ask the agencies, who are responsible for this? How did this happen?” PTI chief questioned.

The former premier said that he will go to court to have the security lapse probed and to find out who was behind it.