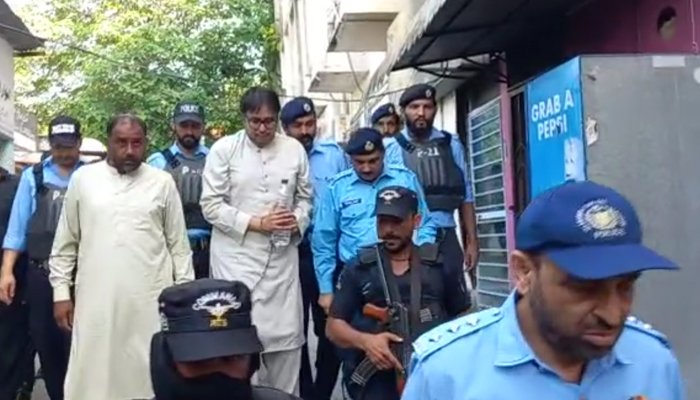 ISLAMABAD: The police presented senior PTI leader Shahbaz Gill before a court in the federal capital Wednesday morning after his arrest on treason charges.

The Islamabad police took Gill, who is PTI Chairperson Imran Khan’s chief of staff, into custody Monday afternoon from Bani Gala Chowk for inciting the public against state institutions.

The move invited strong criticism from the PTI leadership, with the party chairperson saying Gill was not arrested, but “abducted”.

Shahbaz Gill had attempted to incite hatred within the Pakistan Army while speaking on a private TV channel a day prior.

Gill had been using abusive language against the journalists and hurled threats at senior bureaucrats. The PTI leader had been involved in personal attacks and making below-the-belt remarks against his political opponents.

What are the violations against Shahbaz Gill?

Gill says he is ‘not ashamed’

Gill, ahead of being presented before the court, told journalists that he was not “ashamed” of the statement that he made on the private television channel.

“There was nothing in my statement that I am ashamed of [….] my statement was of a person who loves his armed forces,” the ex-special assistant to the prime minister said.

The PTI leader said he did not attempt to provoke anyone and that he was only pointing towards bureaucrats who were involved in “wrongdoings”.

In a press conference Tuesday, Interior Minister Rana Sanaullah had said Gill’s comments were a part of a planned conspiracy to create division within the military.

The interior minister said that the comments were according to the script prepared under the supervision of Khan, which was carried forward by former information minister Fawad Chaudhry and Gill.

“Khan is working on a narrative after realising that he had been trapped in the foreign funding and Toshakhana reference,” the interior minister said, adding that this conspiracy was plotted to divert public attention from their [PTI] wrongdoings.

“The sentences that were said are such that I think it is not in the national interest to repeat them,” he stated, claiming that the PTI leader went to the extent of “leading people towards rebellion” and “inciting mutiny and sedition within the institution”.