PML-N will begin ‘speaking against army’ in next few days, Fawad Chaudhry alleges 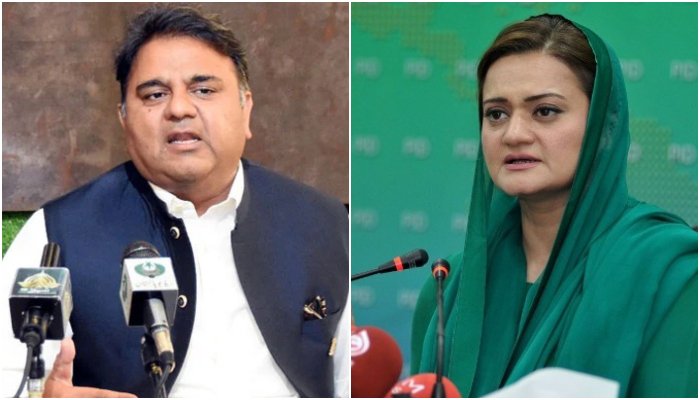 A war of words between the PTI and PML-N erupted on Sunday with PTI’s Fawad Chaudhry alleging that the PML-N “have begun to speak against the judiciary and over the next few days will begin speaking against the army”.

He further alleged the PML-N “feels it has made a big mistake aligning itself with the establishment against Imran Khan” and now party vice president Maryam Nawaz will “seek to push an anti-establishment narrative”.

“The flaw in this scheme is that the people are no longer those of the 1990s and the competition is with Imran Khan,” Chaudhry said.

He said the PML-N’s plan of action will see it “completely forced out” of the country’s politics but “the institutions will suffer damage” in the process.

The PML-N leader chalked up the institutions being “stuck in a vortex” to the mistakes of their leaders.

“Had they stayed within their limits this would not have happened, but anyway, the PML-N will now target institutions,” he said.

Chaudhry censured the party for what he characterised as oscillating between two narratives depending on the situation.

“They were brought into being by the establishment and the brothers decided that one will do pro-establishment politics, whereas the other will sell an anti-establishment narrative. When one narrative failed, they sought to push the other. This formula is also being transferred to the next generation,” he alleged.

It bears mentioning that a day earlier, Maryam Nawaz had said that the PML-N will not accept “unilateral” decisions by the Supreme Court of Pakistan after it ruled that Chief Minister Punjab Hamza Shahbaz will work as a trustee CM till Monday (July 25).

“Amid pressure due to bullying, threats, misbehaviour and abuse, if the house of justice makes specific decisions via the same bench — and negates itself, negates its own decisions, puts its weight behind one side —  do not expect us to bow our heads before such one-sided decisions. Enough is enough!” tweeted the PML-N leader.

‘Stop dragging the army and judiciary into politics’

In response to Chaudhry, PML-N spokesperson Marriyum Aurangzeb, who is also the information minister, said that “he who abuses and threatens institutions should not portray themselves as their representative”.

Aurangzeb said that Khan “admitted that he took the help of institutions and agencies to run the government for four years”.

“We will not allow the murder of justice with this bullying, these threats and insults. The narrative of Nawaz Sharif and Muslim League (N) is and will remain in line with the constitution,” she continued, adding: “Stop dragging the army and judiciary into politics.”

She alleged it is Imran Khan who is targeting the institutions and that he seeks to remove their leadership.

The PML-N leader called upon the Election Commission to decide on the foreign funding case soon, the verdict for which was reserved last month.

“Imran Khan wants an NRO in the foreign funding case through bullying, intimidation, chaos, riots and hooliganism,” she claimed.

The minister called for a full court bench to hear the case related to the election of the chief minister of Punjab.

“Justice on important national, political and constitutional matters should not only be done, it should also be seen to be done,” she said.

“Due to the instability created by Imran Khan, the economy faces the risk of bankruptcy. The people are paying the price of Imran Khan’s economic destruction in the form of inflation, unemployment and poverty.

“Imran sahib wants to avoid accountability, hide his corruption and gain power through back channels. Now this war is against the fascism of the arrogant, anti-constitutional Imran sahib,” she said further.

The minister said the government “will not let the people and institutions of Pakistan become slaves to the wishes of Imran Khan”.

“We will not let the democratic and constitutional system go bankrupt,” Aurangzeb added.