My struggle against thieves will continue be it rains or hot weather: Imran Khan 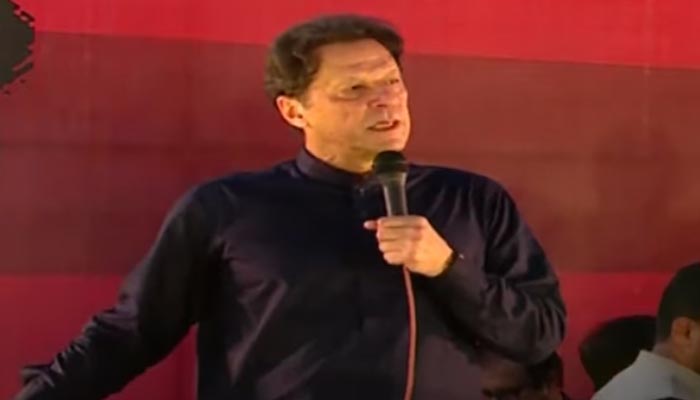 JHELUM: PTI Chairman Imran Khan Saturday said that his struggle against the “thieves” will continue whether it is raining or hot weather.

Speaking at a public gathering in Jhelum, the former prime minister said that he is fighting for the supremacy of law in Pakistan.

“I have struggled for 26 years while remaining within the boundaries of law and Constitution,” he said.

Talking about the Sharif and Zardari families, Khan claimed that Pakistan was at the top before they ruled Pakistan.

“Nawaz Sharif looted the country and is now telling us what to do,” he added.

The ex-premier said that the floods have affected Balochistan, Sindh and Khyber Pakhtunkhwa.

“How will the provinces generate surplus after all the destruction caused by rains?” he asked, adding that KP’s Finance Minister Taimur Khan Jhagra has been asking to meet Finance Minister Miftah Ismail for two months.

Khan said that this conspiracy is not against him but to weaken the country’s democracy, adding that the [government] is cornering PTI and are trying to make me ineligible.

He continued to say that the allied parties are scared of the elections because the PTI will beat them.

Earlier today, the PTI came under fire for the jalsa call despite catastrophic floods.

Journalists, politicians, and other people denounced the move, stressing that in light of the catastrophic floods in the country, the party should have called it off.

Some called it “tone deaf” and others “shameless”.