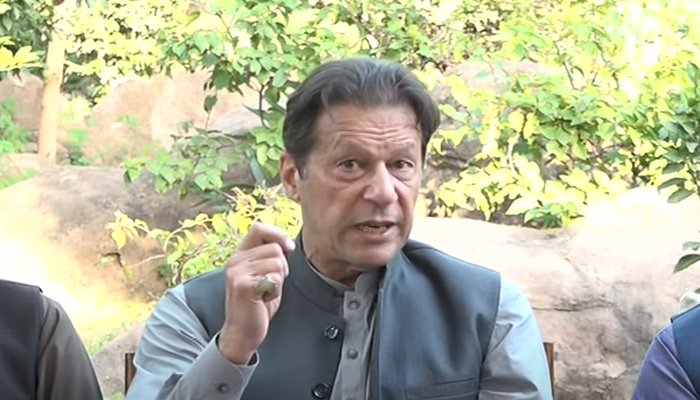 ISLAMABAD: PTI Chairman Imran Khan said Monday that his party’s anti-government “Azadi March” would not be delayed past October as they have completed their preparations.

In a press conference, the PTI chairman said: “My march will be held in October if the government does not announce the date for the next general election.”

The PTI chief warned the government that multitudes of people would take to the streets responding to his call to the nation for the anti-government march.

Khan said he was still cutting the government some slack so that they could decide on it. “I am actually giving them some more time before embarking on our long march protest.”

“[Interior Minister] Rana Sanaullah won’t even know what hit him, such is my preparation,” Khan warned the top minister, who recently claimed the government’s preparation was 10 times more as compared to May 25.

He said dialogue was out of the question with the ruling elite. “There’s no negotiation with criminals. You can hold reconciliation talks with Baloch or Sindhi nationalists, but not with the felons like them,” Khan added.

Khan’s press conference came after his party won Sunday’s by-election by a major margin. The PTI chief won six of the eight National Assembly seats up for grabs and his party added two more to their seat count in the Punjab Assembly.

But not completely satisfied with the results, Khan alleged that the elections were held in the constituencies where PTI was weak and the ruling coalition fielded joint candidates to ensure his party’s defeat.

He said that the government did not wish to hold elections and used floods as an excuse. “They said that there were floods. But in the constituencies where elections were held, floods did not have an effect there.”

Khan claimed that he lost Karachi’s Malir by-polls to a PPP candidate — Abdul Hakeem Baloch — as it was rigged.

“Sindh’s election commissioner was on the provincial government’s payroll. We reject [Malir’s] by-election and demand re-election. The PPP swung the polls to their advantage through indiscriminate rigging,” Khan alleged.

He said the nation had rejected this legislature as well as this government and wanted new polls across the country.

Khan condemned the law enforcement agencies for booking the ageing PTI leader Azam Swati in a “baseless case” and then allegedly subjecting him to grievous bodily harm in police custody. “They beat up the 75-year-old in front of his grandchildren.”

Chiding the government for allegedly torturing PTI leader and former federal minister, he said that what the authorities did to him was “utterly shameless”.

“Doesn’t the Constitution provide the people of Pakistan the right to their self-esteem? These rulers were afraid of elections,” Khan said adding, it was time to move forward.

“We will approach the international human rights bodies against these violations.”

Earlier, PTI leader Faisal Javed said chairman Khan would soon announce the course of action regarding the long march after consulting with the PTI leadership.

Javed said the party’s decision on the final long march call would be revealed after the meeting.

The PTI chairman contested seven of eight seats and secured six, while PPP, part of the ruling coalition, claimed the other two seats.

While Khan will have to quit from all but one of the seats won — and polls will have to follow — the victory indicates his political narrative was popular among voters.

The cricket-turned-politician, who was sent home through a no-confidence vote in April, has been addressing huge public meetings across Pakistan demanding early elections.

The PTI’s key meeting, chaired by Imran Khan, was primarily held to decide on when to push their strategic envelope for mounting pressure on the government in the shape of a final ultimatum for early elections.

The meeting also consulted on finalising a date for the long march, while the report on the initial results of the by-elections also came under review.