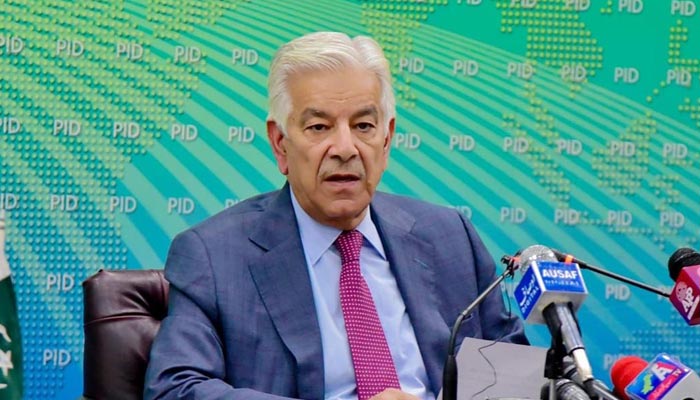 “Imran Khan has been using [abusive] language since his ouster. Before, Khan would say that he and the [establishment] are on the same page. During his time in power, his hugs would not end with them and now, he is abusing them,” Asif said.

Addressing a press conference with ministers Ahsan Iqbal and Marriyum Aurangzeb, the defence minister added that the PTI chief’s only problem is regaining power. He added that Pakistan’s state cannot function at the behest of Khan’s personal wishes.

“Pakistan’s state is not subject to anyone’s wish; it [functions] under the law and Constitution,” Asif remarked.

The minister added that Imran Khan only “begs for, abuses, and holds meetings” for power.

“We (PML-N) do not believe in political victimisation,” the minister said, adding that his party believes in rule of law.”

He criticised Khan’s indifference to being accountable in multiple cases and recalled how Nawaz Sharif would appear in courts himself when summoned.

“Nawaz Sharif would himself appear in courts and [in front of] joint investigation team,” he said.

The minister slammed Khan for shutting down the accountability commission, along with cases pertaining to Bus Rapid Transit (BRT), Malam Jabba, and Billion Tree Tsunami.

“They are annoyed that the courts are providing relief to the PML-N,” the minister said, adding that Khan’s wishes have been ruined.

Khawaja said that Imran Khan would have completed five years in power had he not been “incompetent, corrupt, and arrogant”.

“Imran Khan loves money, but he will get tired after continuously crying,” he said.

Highlighting the sacrifices of the Pakistan Army during the press conference, Khawaja Asif said that 53 soldiers including officers have been martyred in the last three months.

“Soldiers of the armed forces are sacrificing their blood for the country’s security,” he said.

Referring to PTI’s criticism over the acquittal of PML-N leaders, Khawaja Asif said that the court issued its ruling on merit.

“Imran Khan Niazi and his followers have nothing to show for their performance,” he said and accused the past government of lodging false cases against the leaders of PML-N.

“A baseless money laundering case was registered against Shahbaz Sharif and Hamza Shahbaz,” he added.

“We proved by our words and actions that we stand with the judiciary,” said Khawaja Asif.

Responding to a question, the PML-N leader reiterated that the upcoming general elections would be held as per the schedule.

On his part, Ahsan Iqbal claimed that Imran Khan’s recent movement is not aimed at holding general elections in the county.

“At least four months are required for the new census in the country,” he said, adding that the government will not bow down to any pressure.

“It is not possible to hold early elections due to the rehabilitation of flood victims,” the PML-N leader added.