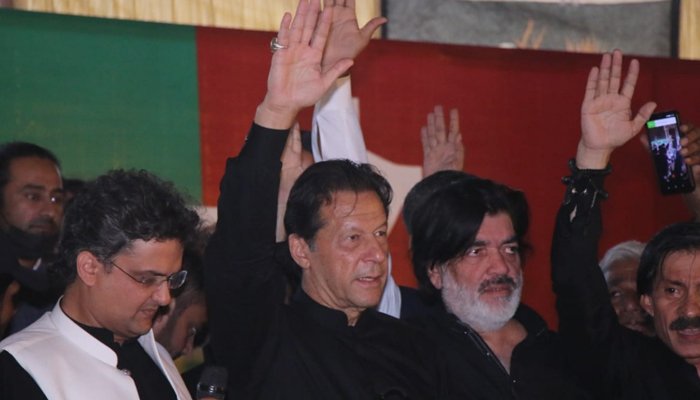 KARACHI: In a veiled dig at Sindh’s ruling party PPP, PTI Chairman Imran Khan said Friday that the reign of “dacoits” in the province should come to an end.

Khan’s remarks came during his visit to Karachi as he rallies his party workers for the anti-government “Azadi March”, for which the date is yet to be announced. In a recent gathering, the PTI chairman told his workers to be ready as he could give the call for the march “at any time”.

In his address today, the PTI chairman said that in the next general elections, his party would form governments in Sindh and the Centre.

“Sindh’s resources are stolen, and they are siphoned out of the country,” the PTI chairman said.

Khan urged Karachi’s youth to come forward and partake in politics as political movements in the early days would begin from the metropolis.

“Had there not been violence in Karachi, it would have progressed more than Dubai,” Khan said as he vowed that now, things would change for the port city as “no power” could stop his party from getting its mayor elected in the upcoming local body elections.

“After the local body elections, we will also emerge successful in the general elections,” he said.

The PTI chairman also said that the incumbent government, which came into power through a “foreign conspiracy”, would not remain in office for long. “My nation has stood up for its future.”

Seperately, while speaking to lawyers in the metropolis, the former prime minister said that the nation is facing a “decisive time” as if “big thieves” keep getting NROs then the country would not have a future.

He said that lawyers understand the need for upholding the law and that is why they should support his cause.

“Powerful people steal money and launder it abroad. This is why, I am waging jihad and I want all of you to support me,” the ex-prime minister said.