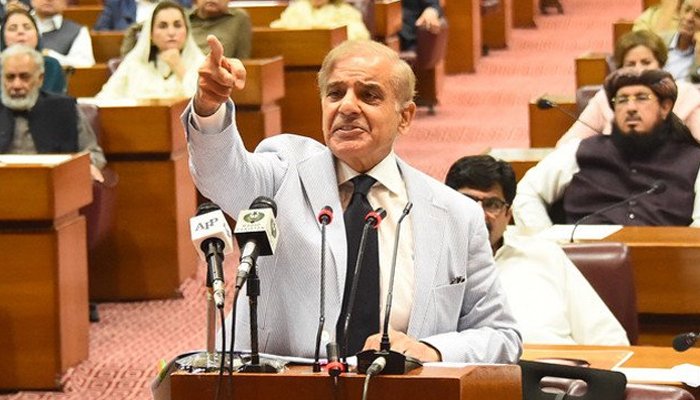 ISLAMABAD: Prime Minister Shehbaz Sharif praised Friday Kashmiris and said the territory’s dispute has been a battle of hope against overwhelming odds as the nation marks Youm-e-Istehsal to express solidarity with their Kashmiri brethren.

“The Jammu & Kashmir dispute has been a battle of hope against overwhelming odds, of courage against fear, & of sacrifice against tyranny,” the prime minister said in a series of tweets.

He mentioned this day marks the third sombre anniversary of India’s illegal and unilateral actions of August 5, 2019, that aimed to change the internationally recognised disputed status of IoJK and alter the demographic structure of the occupied territory.

“Generations after generations, brave Kashmiris have persevered in the face of fear, intimidation, torture, and worst forms of human rights violations. Indian oppression has failed to dent their resolve.”

Today, PM Shehbaz said the country pays rich tributes to all the martyrs of occupied Kashmir for their ultimate sacrifice and to their families for their resolve and courage.

Pakistanis are observing Youm-e-Istehsal today to mark the third year of the Indian military siege of occupied Kashmir and denounce illegal, immoral, and unconstitutional steps to strip its special status.

On August 5, 2019, the Modi-led Bharatiya Janata Party government struck down Articles 370 and 35A of the Indian constitution, thereby scrapping the law that granted Kashmir its special status.

In his message on the occasion, President Dr Arif Alvi said the resolution of the Kashmir dispute in accordance with the relevant United Nations Security Council resolutions and the wishes of the Kashmiri people is the only way to ensure durable peace and stability in the region.

The president said Pakistan honours the sacrifices of the Kashmiris in their just struggle for their right to self-determination.

The president said India’s August 5 actions contravene several UNSC resolutions which stipulated that the final disposition of the State of Jammu and Kashmir will be made in accordance with the will of the people through a free and impartial plebiscite conducted under the auspices of the UN.

Alvi said Pakistan will continue to stand shoulder-to-shoulder with their Kashmiri brothers and sisters in their just struggle.

He called upon the international community to take practical steps to hold India accountable for its gross and widespread human rights violations in IIOJK and to facilitate a peaceful resolution of this long-standing dispute.

In connection with the Youm-e-Istehsal, a rally was held from the Foreign Office on Constitution Avenue in Islamabad to express solidarity with the oppressed Kashmiri people.

People belonging to different walks of life, including parliamentarians, participated in the rally.

Carrying banners, the participants chanted slogans in support of the Kashmiri people and against the Indian atrocities.

Speaking to the participants of the rally at D-Chowk, Defence Minister Khawaja Asif said Pakistan’s commitment to Kashmir is “everlasting” and it will never dilute because of the internal situation.

In his remarks, Adviser on Kashmir Affairs Qamar Zaman Kaira said the Kashmiri people have been braving Indian atrocities over the last seven decades and sacrificed over one hundred thousand lives.

He said every Pakistani is aware of its national responsibility and stands by its Kashmiri brothers and sisters.