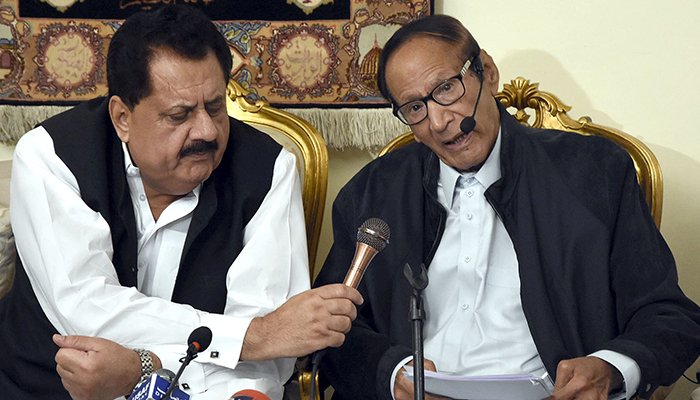 During today’s proceedings, the CEC said ECP is issuing notices to the parties in the case — PML-Q leader and his brother, Pervez Elahi and Punjab Secretary-General Kamil Ali Agha and both — Shujaat and Cheema — would retain their positions till the next hearing.

The CEC then adjourned proceedings till August 16.

Shujaat’s counsel told the four-member bench that his client got to know about a meeting of the party’s central working committee meeting, which through an unsigned letter, had decided to remove the ex-PM and Cheema.

He told the bench that a central working committee does not “exist” in the party and the leaders’ decision to hold an intra-party election was also illegal.

He stressed that Shujaat and Cheema still hold their offices and demanded action against the leaders who called themselves members of the central working committee.

The lawyer said that the central working committee does not have the authority to remove the party president from office, while they can leave office through voluntary resignation.

He apprised the bench that the last elections of the PML-Q were held in 2021 and every person contesting in those polls was elected unopposed.

“No office bearer can be removed. They will cease to hold office only if they resign or die.”

The fault lines in the party became visible when Shujaat refused to support Elahi during the Punjab chief minister’s election, saying that he would not back PTI Chairperson Imran Khan’s candidate — even if it was his brother.

As a result, Elahi lost the election to PML-N leader Hamza Shahbaz by 10 votes as they were rejected following Shujaat’s letter to former deputy speaker Dost Mazari.

But Hamza’s victory was short-lived as the Supreme Court instated Elahi as the chief minister.

“It has become necessary to isolate Ch Shujaat to save the party from destruction,” said Senator Kamil Ali Agha while talking to the media after the CWC meeting in Lahore.

But yesterday, the PML-Q’s Central Executive Committee reposed confidence in the leadership of Shujat and decided to send a show-cause notice to Senator Agha and others for holding an “illegal meeting” in Lahore.

The party’s provincial presidents disassociated themselves from the Lahore meeting and condemned the illegal dismissal of Shujat and Cheema. The meeting passed a resolution unanimously to express confidence in the leadership of Shujaat.

It was decided in the meeting that a legal team would be consulted to challenge the illegal move of the PML-Q Punjab chapter as it was not authorised to convene a meeting on August 10.

The meeting’s participants to suspend the party membership of those participating in the Lahore meeting.