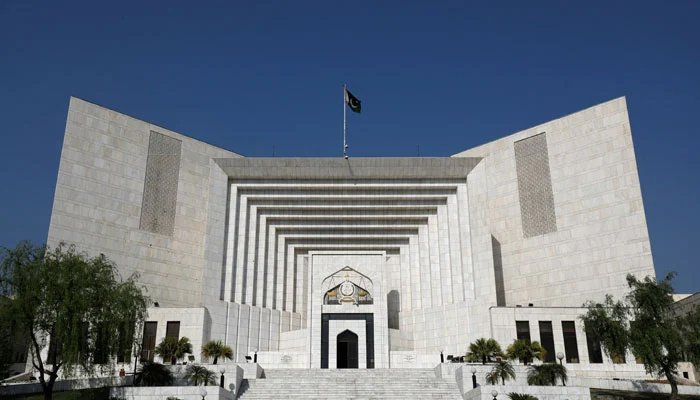 Senior Advocate of Supreme Court Akhtar Hussain, who is part of the Judicial Commission of Pakistan as a representative of the Pakistan Bar Council, on Friday laid stress on meetings of the body ending with a formal vote-taking rather than the discussion “abruptly” ending without resolution.

Advocate Hussain became the latest member to write to the Commission and the chief justice, saying in his letter that he was “compelled” to do so. He noted that Justice Qazi Faez Isa, Justice Sardar Tariq Masood, Justice Sajjad Ali Shah and the Attorney General for Pakistan, Ashtar Ausaf, wrote letters addressed  to the body before him.

“It is with considerable regret I am compelled to write this letter too,” he said.

The advocate said that he feels that in the first place “the writing of such letters and the issuance of press releases and audio proceedings of the Commission’s meeting should not have been necessary”.

“If the meeting of 28 July had not been abruptly terminated and a formal vote and final decision been recorded in the minutes at the end of the meeting – this occasion may not have arisen,” he said.

Advocate Hussain said a vote is essential “as it is entirely possible that one or more members of the Commission may change their minds after listening to their colleagues”. This, he said, applies to the appointment of judges as well as any other matter discussed by the JCP.

Noting Justice Shah’s concern that the audio may have affected the reputation of the judges, Advocate Hussain said it was necessary to have consulted with all members of the Judicial Commission before deciding to release the audio recordings in relaxation of the rules.

He also raised the point that although the attorney general observed that the Judicial Commission should defer all matters until rules and criteria for appointments were framed, but given that the only other person who had proposed deferring the meeting was the chief justice, “it could not be said that the majority of the Commission had decided to defer the meeting”.

The advocate stressed on the need for the Commission to “amend the Judicial Commission’s Rules and frame more objective, transparent and measurable criteria and processes for the nomination and appointments of judges”.

“There is also a clear majority for adhering to seniority principle, until this process is completed and also for allowing all Commission members to propose nominees for appointment rather than the chief justice alone,” he wrote.

The advocate said that this must be treated as a decision of the Commission and implemented accordingly “rather than needlessly making alternate nominations which are then not approved (as has happened on the last three occasions)”.

“Sir, to my humble view, this is the only solution to avoid factionalism which is unfortunately prevailing,” Advocate Hussain stressed.

“I once again request that the Rule Making Committee of the Commission be activated under chairmanship of the Senior Puisne Judge as per past practice with a clear mandate to solicit the views of all stakeholders and thereafter devise draft Rules and Criteria for Appointments for the approval of the Commission within four weeks,” he added.

The advocate said that the divisions that have cropped up within the judicial institution “are not in the national interest”.

“The blame can be rested at many doors. But as head of the legal fraternity of Pakistan – the solution lies, first and foremost, at your door,” he said to the chief justice.

“Even otherwise, on a personal level, your Lordship’s calm and unfailingly courteous disposition makes you best suited for the onerous task of once again uniting our fraternity. Let that be your legacy,” he said.

How a JCP meeting became controversial

His letter follows a meeting of the commission held on July 28 to discuss the appointment of high court judges to the Supreme Court from among nominees put forward by Chief Justice Umar Ata Bandial.

The official statement issued after the meeting said that the JCP chairman, after detailed discussion, proposed to “defer the meeting in order to enable the Hon’ble Chief Justice of Pakistan to place additional information and data about those already proposed and if he considers appropriate, add more names to the list of proposees for consideration by the JCP”.

But controversy erupted when sources told Geo News that the JCP had rejected the nomination of the judges proposed by the CJP for elevation to the Supreme Court.

Following the SC statement, Justice Isa and Justice Masood wrote letters to the JCP contesting what was said in the statement.

Justice Masood said that the press release issued by the SC public relations officer presented a “totally different version of events from what actually occurred”. He also called for the “immediate release of factual and correct detailed minutes of the meeting while giving detail of observations/discussions of each member in the meeting room”.

Justice Isa, who had also earlier objected to the meeting being called while he was abroad, stressed in his letter that JCP’s decisions made on the appointment of judges be released publicly.

Justice Isa, concurring with Justice Masood, had stated that CJP Bandial “did not dictate the decisions that were taken, and left the meeting quite abruptly, followed by Justice Ijaz-ul-Ahsan”.

To put matters to rest, the SC released audio recordings of important bits of the meeting on its website and subsequently another statement.

The Supreme Court, in its new statement, said that the “audio recording from time slot 1:29:45 to 1:38:08 contains the statement” made by Attorney-General for Pakistan Ashtar Ausaf Ali, led to the deferment of the meeting.

The statement said that the AGP “did not assess or reject the merits of any of the High Court judges proposed for appointment to the [Supreme Court]”.

“As a result, 5 members of the JCP supported the deferment of the meeting as reported in the Press Note of 28.07.2022,” said the Supreme Court.

But the new statement prompted JCP members to write letters to argue against the version of events described by the SC, such as the latest letter by Advocate Hussain.