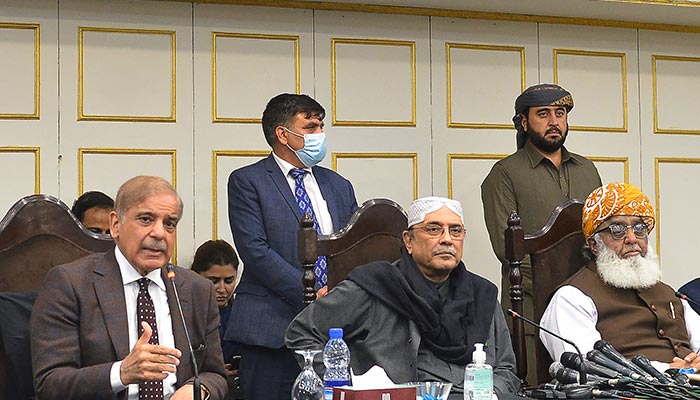 ISLAMABAD: Reacting to PTI Chairman Imran Khan’s demand of holding by-elections in Karachi’s NA-237 constituency — where PPP candidate Abdul Hakeem Baloch emerged as a winner — ruling coalition parties Monday rejected the idea and said that deciding when the polls will take place is only the government’s prerogative.

In a joint statement, the coalition parties said that the government will “not allow any mob to impose a decision [related to the elections] on the basis of force”, adding that “those who take the law into their hands will be dealt with according to the Constitution and the law.”

Regarding the appointment of the next army chief, the statement said that Prime Minister Shehbaz Sharif will make a decision on the matter as per the law of Pakistan, adding that the “foreign-funded rabble-rouser” Khan would not be allowed to use “intimidation and dictation tactics” to have his own way.

They further added that the aim of targeting the army chief, leadership of intelligence institutions, officers, chief election commissioner, and others is tantamount to “blackmailing”, which is definitely not a political act but a part of a conspiracy, which will not be allowed to succeed.

“It is clear that as per the Constitution and law of the country, only the premier has the constitutional authority to make appointments to important posts, including that of the army chief,” the statement read.

Referring to Khan, the statement further added that “a person deprived of power is targeting national institutions under a deliberate agenda.”

“Actions like dirty campaigns against the martyrs of the Pakistan Army, and encouragement of rebellion in the army are tantamount to anti-nationalism which will be dealt with according to the Constitution and law.”

The ruling parties added that the Constitution, democracy, and system will not be allowed to be enslaved on the basis of bullying and intimidation.

The statement also clarified that the economy of the country and the rehabilitation of the flood victims is the top national priority at this time, on which there will be no compromise.

“The government, institutions, and the people of Pakistan agree that political instability will not be allowed to derail the economy, while access to resources for flood victims will not be affected in any way.”

The statement said that after the by-elections held on October 16, the number of seats of the coalition government in the National Assembly have increased from 174 to 176, while the PTI has lost seats “due to Khan’s arrogance.”