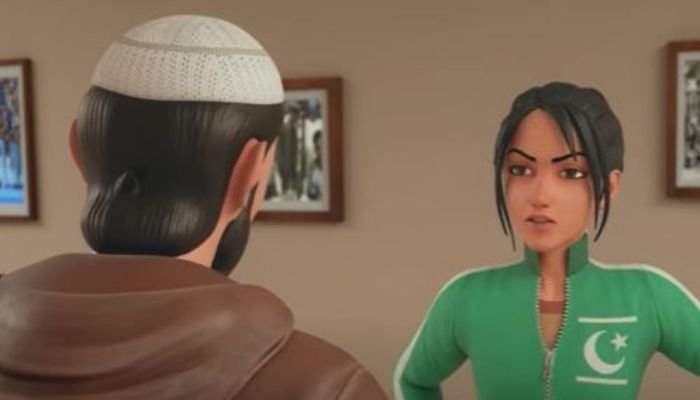 In ‘Team Muhafiz’ episode four, titled ‘Deemak,’ our heroes foil yet another sinister plot by Rawka, the villain we all despise. This one is about hockey.

The episode begins with our favourite superheroes attempting to solve an important mystery involving the Jinnah Hockey Stadium map that they recovered from Rawka’s hideout.

A breaking news story (provided by Geo News) interrupts the team’s thoughts. The national women’s hockey team’s coach has been replaced just days before the start of a championship. The team suspects foul play, so Parinaaz decides to seek answers from the Pakistan Hockey Federation’s upper echelons (PHF).

She undertakes a visit to the PHF headquarters, where she meets the president of the federation, Gulzar Cheema. We get bad vibes from this guy, right from the start. A misogynist by nature who doesn’t believe women’s sport heralds importance, Cheema tries to cover up the ‘Coach-gate’ but Parinaaz suspects foul play. Parinaaz leaves the PHF headquarters fuming, but Badshah Khan tells her he has something up her sleeve.

Viewers are then entreated to the next scene, where the plot thickens. Cheema receives a call from Rawka’s right-hand man, Kankatta Addu. Turns out, the women’s team coach was removed and has been kidnapped at Rawka’s behest, who now wants to reward Gulzar handsomely for it. The two discuss a meeting point.

The only problem with that, as far as the villains are concerned, is that tech genius Badshah Khan has been taping their conversations, and Team Muhafiz was listening to the entire exchange. Zane, Mahnur, Parinaaz, Reza, and Aarya arrive just as the money exchanges hands between the villains and dole out another thrashing to the villains.

The police intervene, arrest Cheema and the coach is rescued. All is well that ends well, right?

Wrong. The episode ends with Rawka fuming at his latest plot getting foiled and promises vengeance against the team, leaving us all at the edge of our seats.