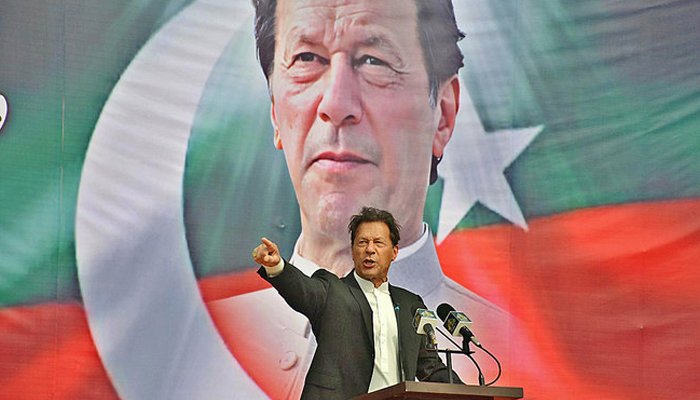 ISLAMABAD: Now that the verdict in the PTI foreign funding case will be announced today (Tuesday), one needs to know what led Akbar S Babar — the founding member of the party — to file the case in the Election Commission of Pakistan (ECP).

Email exchanges between PTI Chairman Imran Khan and Akbar S Babar, seen by The News, reveal that after being informed about the wrongdoings of some of his top party leaders, Khan turned a blind eye to the accusations and advised Babar to tell the truth politically to win the trust of his peers and strengthen the party.

Despite knowing the truth about what was happening in the party, Khan ignored the alleged wrongdoings of some of the top PTI leaders and eventually sided with those who were accused of misconduct.

Babar, being the whistleblower, was punished and deprived of party membership.

The email exchanges between Khan and Babar have some interesting facts where Khan can be seen defending those who were accused of malpractices.

Meanwhile, the person who highlighted the wrongdoings of his colleagues within the party was asked to remain silent or be political for the sake of the party’s interests.

On August 7, 2011, Babar wrote an email to then PTI Secretary-General Arif Alvi and Khan, where he highlighted the business interests of some party leaders.

Khan, in reply to that email, advised Babar not to go to such extremes against his colleagues as this would divide the party. To which, Babar said he had all the evidence and was not drawing conclusions on the basis of hearsay.

On August 8, 2011, Khan replied to Babar’s email and said if they (some top PTI leaders) were business partners, what had that got to do with the running of the party as long as the party interest came first.

On August 10, Babar again replied to Khan in an email and highlighted how two groups, one from Khyber Pakhtunkhwa and the others from Islamabad and Karachi, were protecting their own interests.

Khan, instead of taking any action or ordering any inquiry, asked Babar to ignore and tell the truth in a political way.

On September 3, 2011, Alvi issued a notification and relieved Babar from all PTI responsibilities. According to the former PTI leader, the party took a unilateral decision because he highlighted the wrongdoings of the party leaders.

A week later, Babar wrote a detailed letter to Khan and pointed out that the PTI Central Office was infested with corruption and being run like a mafia by a few dishonest and incompetent individuals.

The letter also mentioned the investments made by some members of the PTI Core Committee in the real estate business of PTI leader Amir Kiani near Banigala.

“In another email, I stated that at the very least the allegations merit independent investigation. Some in the top leadership, particularly the core teams, are in a serious conflict of interest situation (business partnerships). Instead of seeking details and ordering independent investigations, you went into the defence mode by stating that Amir and Saif couldn’t be accused of sabotaging the party interests. If they were business partners, what has that got to do with the running of the party as long as the party interest comes first,” Babar’s letter to Khan states.

Babar also highlighted the foreign funding issue in his letter to the former prime minister.

“I now bring your attention to some more serious issues that could put the party in further political and legal jeopardy. At least $135,000 have been remitted through the PTI USA LLC account, collected from paying PTI members. The $10 per paying member donations were sought by you during your visit to the US and Canada for the sole purpose of opening district PTI offices all over the country (your video is available on the record). To date, not a single district office has been opened, utilsing the money received exclusively for this purpose. Not once has the PTI conducted a performance audit of its accounts to justify resource collections based on commitments with the ordinary paying members,” Babar’s letter said.

Instead of responding to Babar’s letter or initiating an investigation, Babar’s party membership was revoked. Khan deliberately overlooking the wrongdoings within the PTI led to the filing of the foreign funding case in the ECP.

The News tried to contact Khan’s Chief of Staff Dr Shahbaz Gill for the official version, but he did not attend this scribe’s call.