Imran Khan wanted CEC removed as he was aware of his money laundering case: Nawaz 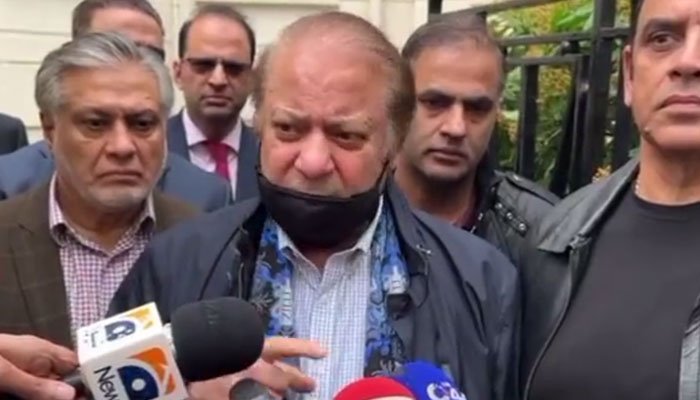 LONDON: Former prime minister and PML-N supremo Nawaz Sharif on Tuesday said that PTI Chairperson Imran Khan wanted to remove Chief Election Commissioner Sikandar Sultan Raja from his post because he was “aware of the money laundering case against him”.

The commission found that donations were sent to the PTI from America, Australia, Canada, and the UAE. PTI received funds from 34 individuals and 351 businesses including companies, the ECP verdict states.

Talking to media persons outside his residence in London today, the PML-N supremo called the development the “biggest theft in history.”

“Today, the biggest theft in history and biggest money laundering case has been proven. Imran Khan knew that this verdict would prove his foreign funding,” he added.

The PML-N leader said that the decision of the foreign funding case has been announced after eight years with complete evidence and facts. “Khan used to call himself an honest leader but the verdict today has revealed otherwise,” he added.

“Khan knew that he had committed the biggest money laundering [in the country’s history]. This is the reason he kept demanding the chief election commissioner’s resignation,” said Nawaz, adding that “he took funds from the foreign nationals and is trying to implement foreign agenda on the nation.”

The PML-N supremo recalled that the country was progressing and the economy was growing during his era which hads been destroyed by Khan. Talking about the former chief justice of Pakistan Mian Saqib Nisar, who conferred the titles of sadiq and ameen upon Imran Khan, Nawaz said that the judge should also be punished.

“Nisar has committed atrocities along with Khan and directed the National Accountability Bureau to wind up the investigation against the PML-N,” he said, adding that “a time will come when Nisar will have to answer these questions.”

Nawaz demanded action against the PTI chief, saying that he has destroyed Pakistan. “This man Imran is extremely dangerous for Pakistan and he should be punished as soon as possible,” he added.