If Imran Khan’s bail is rejected, govt will be left with ‘no choice but to arrest him’: Rana Sanaullah 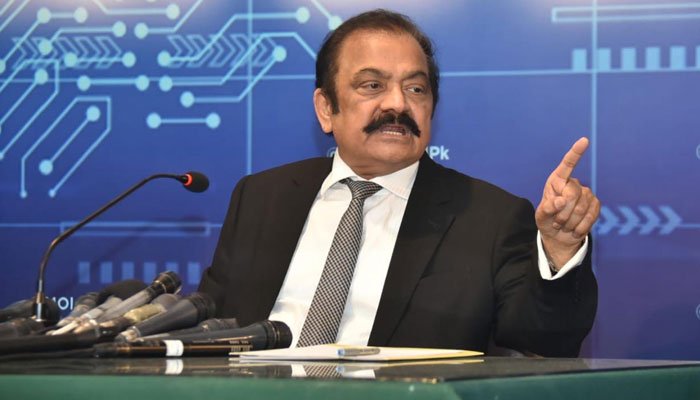 ISLAMABAD: Minister for Interior Rana Sanaullah on Tuesday said if PTI Chairman Imran Khan’s request for bail is rejected by the court, the government will have “no choice but to arrest him”.

“If the government decides, we will arrest Imran Khan,” the minister said, and rejected the party’s claims of the “devastation” that will follow.

He was speaking on Geo News programme “Aaj Shahzeb Khanzada Ke Saath” and was referring to Khan being granted protective bail by the Islamabad High Court till Thursday in a terrorism case, after which he is expected to attempt to obtain pre-arrest bail.

The case was filed after the PTI chairman allegedly threatened a female judge — who remanded into police custody his chief of staff, Shahbaz Gill — besides speaking against senior police officials at a rally.

Referring to the statements by Gill which landed him in prison on sedition charges, the minister said that the remarks were “not the act of an individual”.

“Gill’s [comments] were a part of the party’s campaign rather than an individual act,” he said, adding: “Gill revealed during investigations that it was a written statement.”

“PTI’s social media wing was also a part of the campaign,” he added.

Sanaullah accused the PTI of spreading “negative social media propaganda” targeting the Balochistan helicopter crash martyrs, and questioned why the party has not apologised for its alleged actions.

Speaking of the party’s rule in Punjab, he said that the province is not being ruled by the PTI, “in fact, it is being ruled by PML-Q and the biggest thief”.

“The running of Punjab government affairs cannot go on this way. The stories we hear are bizarre,” he said, adding that matters aren’t being handled well between the PTI and PML-Q and they were unlikely to improve in the future.