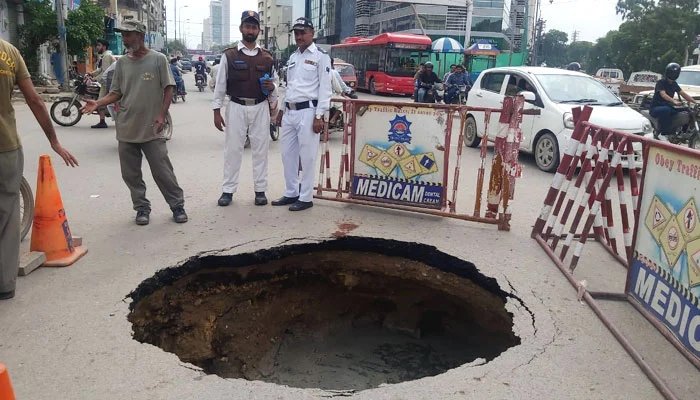 Traffic police told Geo News the sinkhole was formed after a 72-inch pipeline caved in after which the law enforcement agency put up stop signs around it.

Police personnel were also deployed around it to avoid any damage, while no loss of life has been reported, said the law enforcement agency. However, traffics jams occurred on the road, causing trouble for commuters.

Earlier this week, a sinkhole was formed on a road near the Chief Minister’s House in the Civil Lines area of Karachi after a 72-inch wide sewerage line running under the road caved in due to increased water pressure.

The road where the sinkhole emerged on Dr Ziauddin Ahmed Road leads from PIDC Chowk to Clifton in the red zone of Karachi.

This is not the first time that a sinkhole has been formed on the roads of Karachi. The formation of sinkholes is a recurring issue in the metropolis. To top it off, rains have also damaged the roads severely.