Govt conspired to cause rifts between PTI, army: Imran Khan 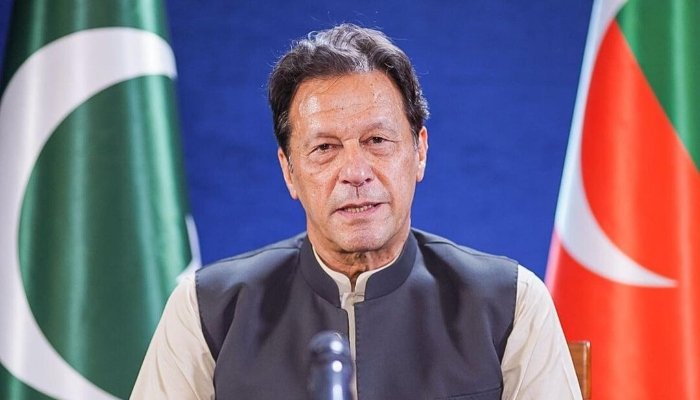 PTI chairperson and former prime minister Imran Khan Wednesday said that the coalition government has hatched a plan to create rifts between the PTI and the Pakistan Army.

Addressing his supporters via a video link, the former prime minister said that the incumbent government has “conspired against the biggest party in Pakistan”.

“They [government] had issues with the fact that the army and the PTI were on the same page. Even India used to acknowledge that,” said Khan.

He added that Israel and India were “overjoyed” after his government was overthrown through the regime change conspiracy.

The PTI leader went on to say that his party exposed the disinformation campaigns against the country.

“The EU DisinfoLab exposed how India had been plotting against Pakistan, and those in the current government were also part of the disinformation campaign against the country,” he alleged.

Khan said that the conspiracy to antagonise the army and a big political party against each other was “extremely dangerous” for the country. “Those conspiring against the PTI are a part of an external conspiracy,” he added.

“Today, it’s being said that we are against the army and now they’ve [the government leaders] become the patriots who are calling us traitors,” he said, adding that he cares about Pakistan, and those who care about the country want their army to be strong.

He said that the government has prepared to crush the PTI.

‘Gill should be given a chance to clarify’

Talking about his aide Shahbaz Gill’s arrest, Khan said he should be given a chance to clarify himself in court.

“Gill should be charged if he has said anything that goes against the law,” said Khan, defending his party member by saying that his driver was attacked and his vehicle’s glass was smashed.

Talking about the party’s foreign funding case, Khan said that it was “baseless.”

The PTI chief said that the party has provided the names of 40,000 donors, who are now being termed “foreigners” by the Election Commission of Pakistan (ECP). “We have provided all the details to the commission,” said Khan.

“People gave us funds and we have audit books to prove that, while other political parties have no evidence to show how they received funds.

“In fact, they don’t have an audit report, no donors, so where do their funds come from?” he questioned.

“Despite a court order to investigate other parties’ cases, it was only the PTI that was put under a trial,” said the PTI leader.

Speaking about the Toshakhana controversy, Khan added that all those who were appointed to higher ranks in the government received gifts. “Asif Zardari took three cars from the Toshakhana while Nawaz Sharif took one car,” he added while demanding that all of them should be investigated.

Khan said that the government was trying to malign his reputation through the Toshakhana reference. He also revealed that the party leaders were receiving threats from the banned Tehreek-e-Taliban Pakistan (TTP).

He further added that the ECP was completely on the coalition government’s side during the Punjab by-elections. “They were sure that they would win the elections, however, all their plans failed.”

The former premier said that the only way to take the country out of the crisis was through free and fair elections.