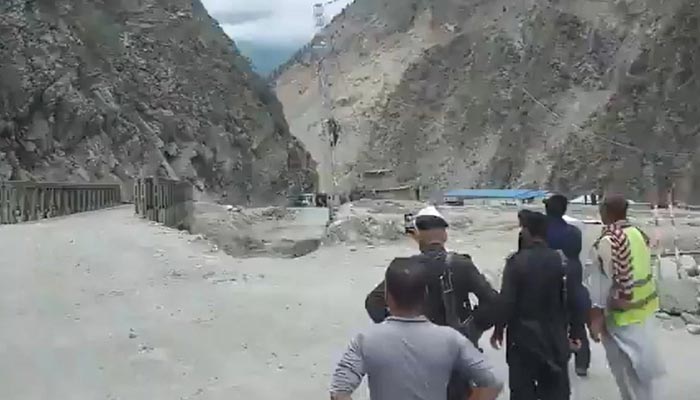 DASU: A temporary Compact 200 bridge on Friday was swept away because of a massive flash flood at Uchaar Nullah stream near the Karakoram Highway.

The incident took place in Upper Kohistan’s Dasu area, leaving Gilgit-Baltistan disconnected from the rest of the country.

Torrential rainfall in the area triggered flash floods, sweeping away the bridge — located close to the residential camps of the 4,500-megawatt Dasu Hydropower Project.

Minister for Climate Change Senator Sherry Rehman also tweeted about the devastation in the wake of the flood asking all district commissioners to “remain vigilant”.

“Massive flash flood at Nullah (RD 303) in Dassu district, KP. Compact bridge has been washed off with the flood surge,” Senator Rehman tweeted, informing followers that the Karakoram Highway has been blocked from both sides.

“No buses are allowed for now on Babusar road,” she tweeted, adding that the bridge was not resilient. The National Highway Authority (NHA) has also issued a travel advisory, blocking the highway for all kinds of traffic, as mudflow continues in the area.

The government informed that the NHA and Frontier Works Organisation (FWO) teams were mobilised at the site for the restoration of the traffic link.

Travellers — planning to move ahead of Dassu from and to Gilgit and other areas — have been requested to use alternate routes via Kaghan and Babusar Pass on both ways of traffic.

Speaking to Dawn.com, Dasu’s Assistant Commissioner (AC) Hafiz Muhammad Waqar said that after the RCC bridge over the Uchaar Nullah was washed away due to floods, the bridge was installed last week on a temporary basis.

The AC also shared that the installation of even a steel bridge in the area will be inoperable, as it will again get washed away by floods.

The Met Office added that rain-wind/thundershower is expected in most parts of Sindh, Balochistan, while at scattered places in south Punjab, however at isolated places in upper Khyber Pakhtunkhwa, Kashmir, and Gilgit-Baltistan on Saturday. Heavy falls are also likely in Sindh and Balochistan during the period.