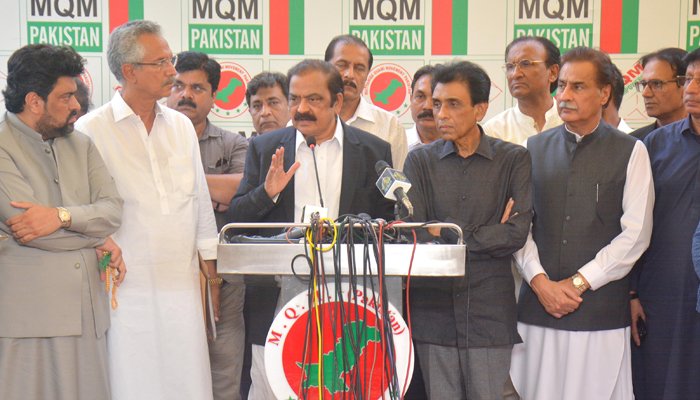 KARACHI: Interior Minister Rana Sanaullah said Tuesday enforced disappearance of citizens is a violation of the Constitution of Pakistan, and the current government is trying to solve this problem at the earliest, The News reported.

The interior minister arrived at MQM-P’s temporary headquarters in Karachi’s Bahadurabad to meet the party’s leadership and the aggrieved families whose loved ones had gone missing.

The visit came after the bodies of three MQM workers — who were kidnapped from Karachi — were recovered from different parts of Sindh last week.

Following the discovery of the three workers’ bodies, the federal government decided to investigate the incident.

In conversation with journalists after meeting MQM-P’s top brass at their temporary headquarters, the interior minister assured the party that the government would try its best to resolve the issue.

In the meeting, Siddiqui informed the minister that he was unable to explain the situation after seeing the bodies of three MQM-P workers who had been missing for years.

While talking to the aggrieved families, the interior minister said that he understands the pain of these mothers and sisters.

“I have gone through this situation myself. Enforced disappearance is the biggest crime, and those who do this are the enemies of the Constitution and law. It is the responsibility of federal and provincial governments to trace the missing persons and present them in courts.”

He said that Pakistan is in debt to all the families whose beloved ones have gone missing, and they are still standing with the country even after this suffering.

“We assure the families of missing persons that their patience will not be in vain.”

On the occasion, dozens of families narrated the stories of their suffering and appealed to the interior minister to recover their missing family members.

Talking to the families, Sanaullah assured his support and said that he would bring all resources to do justice.

He said that the grief of missing families is more painful than death, but all these families have patiently recorded their protests.

“We have always opposed violence, torture, and disappearance. We will sincerely make efforts to recover the missing people and there will be effective and positive progress in the coming days in this regard.

“We hope the MQM-P leadership and those who have been going through this situation will keep their trust in us.”

Responding to a question, the interior minister said that the issue of missing persons is bringing a bad name to Pakistan.

“It’s not a face-saving, but this is the problem of the entire nation. We are sincerely trying to recover the missing persons,” he told the families of missing persons.

On the occasion, the interior minister said that he and federal minister Ayaz Sadiq visited the MQM-P office on the instructions of Prime Minister Shehbaz Sharif to meet the families of missing persons.

Siddiqui had a meeting with PM Shehbaz and many measures were agreed upon and many aspects were decided to be implemented, he added.