Elections will not be held if govt is pushed out of power: Saad Rafique 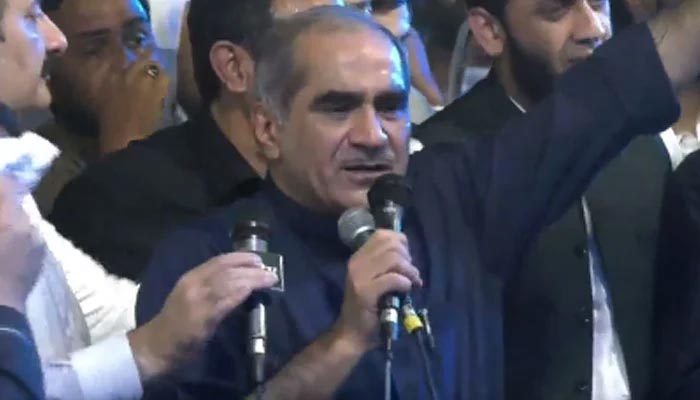 KARACHI: Railways and Aviation Minister Saad Rafique Saturday said if their coalition government is pushed out of power general elections will not be held.

Addressing a public gathering at Liberty Chowk — after the hearing of the Supreme Court on Pervez Elahi’s plea on the chief minister elections in Punjab, Rafique said: “If you (PTI) wants election then it will not happen amid political instability. We do not want fights to turn into war.”

He further added that in order to contest general elections PTI would have to stop with its “foreign conspiracy lies, allegations, and abuses”.

“Elections will be held as per the schedule and if snap polls are announced the decision will be taken by the politicians,” he said.

Recalling the incident that took place during the 2018 elections, he said that in the last general elections PML-N’s mandate was stolen, and leaders were put behind bars; however, “we still did not cross lines”.

“A dirty politician was imposed on the country, it did not overthrow the government through sit-ins we approached the assembly and brought the no-confidence motion under the constitution,” he said, adding that now that the coalition government is formed the former leader is trying to create hurdles in their efforts to pull the country out of the mess.

He further added that it is the right of the parliamentarians to make laws while the court can only interpret the constitution.

The federal minister said that when cases were heard by conscientious judges PTI faced defeat.

“Let the country its operate peacefully…if the country is to be run then the parliament is supreme,” he asserted.