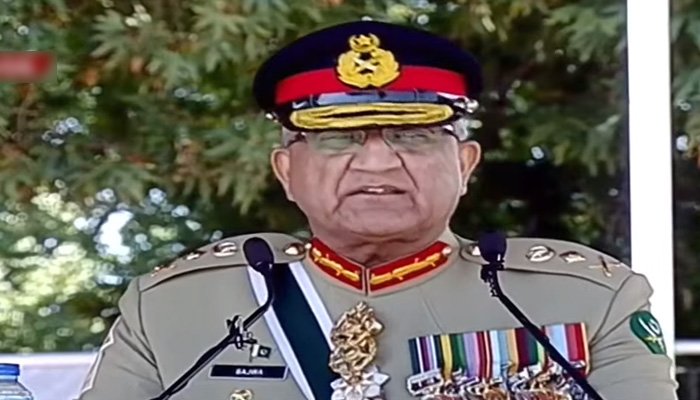 KAKUL: Chief of Army Staff (COAS) General Qamar Javed Bajwa on Saturday advised the passed-out cadets at the Pakistan Military Academy (PMA), not to get distracted by fake news, political wrangling in the country and always respect democratic institutions.

The army chief was addressing the passing out ceremony of the 146th PMA Long Course held at PMA, Kakul on Saturday.

COAS General Bajwa began by advising the cadets to always remember the value of keeping a brave face in front of the men they lead even if they are shattered and frightened as every one of them in a life-and-death situation.

“The contagious energy you will instil in your men when you lead them by example and not merely by words,” he said.

The army chief stressed the importance of keeping the well-being of the troops above all, saying it is the hallmark of a successful military leader.

He also quoted Field Marshal Philip Walhouse Chetwode to remind the cadets of the essence of his words.

He said that Pakistan is a peace-loving country and in the quest for peace, it has extended sincere efforts to evolve good relations with all its neighbours and regional countries.

“We are trying our best to break the political logjam which has denied the south Asian countries to move forward and resolve all regional and bilateral issues in a peaceful and dignified manner,” General Bajwa said.

He said that the people of South Asia deserve prosperity and better living conditions, which can only be achieved with sustained economic growth, developing and lasting peace.

“Therefore we should try to keep the flames of war away from the region,” he said.