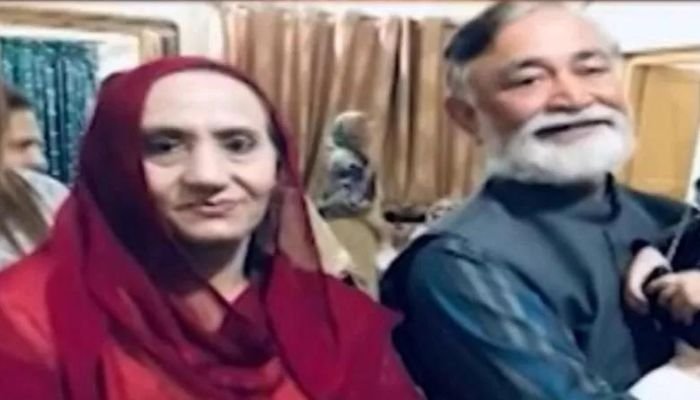 LONDON: The children of an assassinated couple from Lahore have appealed to Punjab Chief Minister Pervez Elahi to help catch the culprits who killed their parents on May 9, 2021, in Lahore’s Sabzazar, and remain unknown and untraced.

Syed Anees-ud-Din, 70, and his wife, Nasira Bibi, 60, were killed by unknown assassins in the late evening of May 9 at their home, and the family have complained that the Lahore police have done nothing to catch the killers despite the fact that the family provided CCTV footage of a suspicious car from the locality.

Syed Ali Junaid and Syed Umair, who live and work in London as security consultants, shared with Geo.tv what happened that evening when they last heard from their parents.

Syed Anees-ud-Din was speaking on the cell phone to his daughter-in-law in London when someone knocked on the main entrance of his three-storey house, and he ended the call to answer the caller at the gate. The family in London never heard from their parents again as they were assassinated, presumably by the same person(s) who entered the home after Anees-ud-Din opened the door.

The couple lived on the ground floor, while on the two upper floors they had tenants who used the same front gate of the house for parking in the garage, but used separate entrances to reach their floors.

It was on the following day, May 10, 2021, when a cousin of Junaid and Umair called them in London to inform them their parents had been assassinated in cold-blood overnight. The maid had arrived at 10am to clean the house as per usual, but nobody opened the door for her. She reported this to relatives of the couple who managed to open the door to find their bodies inside, bearing sharp knife injuries around the neck and different areas of the body.

The tenants were around in the building that night, but no one heard any screams or commotion, and it was only in the morning when the bodies of the couple were found.

Junaid and Umair shared that their sister, who lives in Lahore, registered an FIR at Sabzazar Police Station. Initially the investigation was handled by Sub-inspector Mansab Ali, incharge investigation of Sabzazar, but it was formally requested by Junaid to transfer the matter to the CIA. The case was transferred to ASP Raiwand Shoaib Khomar Memon in the same department.

Junaid also said that his communication with the police hit a snag as the police officers saw his vigilance in the case as disrespectful when he asked for updates on investigation proceedings, and thus he was not provided any information regarding the case. Consequently, the case was transferred to the ASP for Raiwind, who was new on the job.

After around a month, the ASP withdrew from the case, stating that he was unable to carry on investigating due to a biological ailment. The case was then sent to CIA Model Town, where Inspector Zaheer-ud-Din Babar looked into it.

Junaid and Umair told this reporter that their biggest grievance is that the police at one stage blamed them for the delay in investigation. They said that the police, despite the passage of over a year, have been asking them the same questions again and again as every new case officer starts afresh and adds pain to the injury of the victims’ family members. They said the police didn’t attempt to retrieve any CCTV footage from the surrounding area, even after multiple requests by the victims’ family.

The sons met the former Punjab governor, Chaudhary Sarwar, around six months ago in London, and the police started taking an interest in the case. But it went quiet within a few days, and since then, the sons have not been given any update on the case.

Junaid and Umair said that the police neither used the updated technology for Call Data Record (CDR) nor were the geo-fencing results obtained as, according to police, it was the only way to get clues. They said the police told them they would obtain the forensic evidence but “did not do anything”.

The sons have appealed to the newly elected Punjab Chief Minister to look into their case and ask the police to hold a comprehensive investigation.

They said: “Pervez Elahi promised that he would work to resolve the issues of overseas Pakistanis. We request him as victims of a gruesome crime to help us get justice. We want to know what happened to our parents and who killed them. We can never rest and move on unless we have answers to these questions.”

Speaking to Geo.tv, the current case inspector, Zaheer-ud-Din Babar, raised several issues in the investigation. He said the police had done their best but the family of Nasira Bibi had flatly refused to cooperate with the inquiry.

He said: “To us, it looks like a murder within the family. The CCPO Lahore took a personal interest in the case, but one of the victim’s family members was not only reluctant but also put pressure on the police not to approach them. The family has the phone data of the couple’s last conversations, but that has not been handed over to us till now.”

Inspector Zaheer-ud-Din Babar, who has previous experience of working with the CIA, said the day before the murder, Nasira Bibi had told the maid that they were expecting some guests and the only people who knew about the guests were family members of the assassinated couple.

The police officer said: “They are not sharing any information with us. Also during Ramadan, Syed Anees-ud-Din’s daughter came to stay with her parents for a week, and during that week, a male visited the family and stayed there for several hours. We are looking for that person as well, as he can help us with key information.”

The inspector added: “I was tasked with working on this case after one-and-a-half years of the killings. I have done my best, but I want the families to cooperate with us.”

Family members of Syed Anees and Nasira Bibi said the police had the right to arrest and investigate anyone if they had suspicions about them. “To blame the family members for not cooperating is an excuse that has gone on for too long. We want the Punjab chief minister to take notice and help us.”