At least 10 die as bus catches fire near Nooriabad 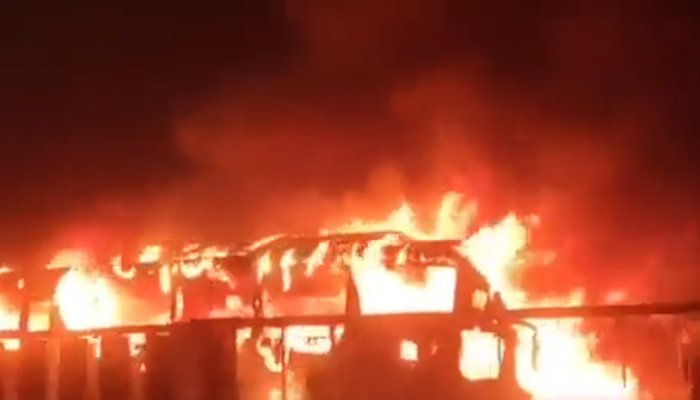 NOORIABAD: At least 10 passengers died Wednesday after a bus caught fire on the motorway near Jamshoro’s Nooriabad Town, the deputy superintendent of police (DSP) Nooriabad said.

The bus, with as many as 80 flood affectees on board, was heading towards Karachi from Khairpur Nathan Shah, the motorway police said. The passengers were of the Mugheri tribe.

The motorway police said that a fire broke out in the air-conditioning unit of the passenger bus near Nooriabad. “The fire may have been caused by a short circuit in the air conditioner.”

As the bus caught fire, most of the passengers were already offloaded, however, several have been reportedly injured.

Taking notice of the incident, Sindh Chief Minister Murad Ali Shah directed the deputy commissioner and superintendent police of Jamshoro to immediately reach the site with ambulances and rescue the affectees.

“The injured persons should immediately be moved to the hospital and the administration should provide all kinds of support to the families of the victims,” he said while expressing grief over the loss of lives.

CM Murad has also summoned an investigation report of the incident.

Information Minister Sharjeel Inam Memon — in his statement — said that he had ordered relevant authorities to ensure that the cause behind the fire and the people responsible were identified within three days.

“Due to whose negligence were precious lives lost? Were there any safeguards in place? Why weren’t passengers offloaded on time? Many transporters have been found guilty of negligence when it comes to safety measures,” the information minister said.

In a statement, Dr Rajput said he had ordered officials to ensure that rescue operation is swift and that the injured are provided medical aid at the earliest.