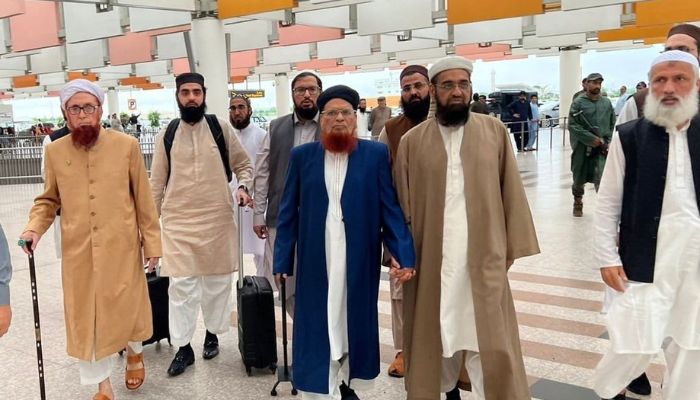 A delegation of notable Pakistani religious scholars who returned home on Friday after “fruitful” meetings with top Afghan and Pakistani Taliban leaders in Afghanistan expressed hope that the Afghan girls will soon be allowed to attend schools in their country.

Furthermore, Pakistani religious leaders were optimistic about their meetings with the banned Tehreek-e-Taliban Pakistan (TTP), promising them their full support for the restoration of peace in Pakistan.

The Afghan Taliban had invited the top religious leaders who visited Kabul under the leadership of Mufti Mohammad Taqi Usmani.

The Ulema sees this as an opportunity and sought help and support from their Afghan hosts in organising a meeting with TTP. According to sources, Maulana Tayyab arranged the second meeting with the Pakistani Taliban after the first failed.

When contacted upon his arrival in Peshawar, Maulana Tayyab told The News that their visit was very fruitful, claiming that they discussed almost all important issues with both the Afghan and Pakistani Taliban.

Maulana Tayyab is an influential religious leader and is widely respected in Khyber Pakhtunkhwa and the tribal districts. The Pakistani Taliban also respect him as a majority of them studied either in his madrassa in Panjpir, Swabi or in other madrassas affiliated with his school of thought.

“In our meeting with the Afghan Taliban, we stressed that you must open girls’ schools and colleges so they can get education. I gave them my example and told them that I am Mullah as well but my niece is presently serving as a general in the Pakistan Army,” he said.

“Had she not attended school and not gotten education, how could she have served the Holy Quran and our religion,” Maulana Tayyab said.

He said he advised them to allow all girls to go to their schools and colleges. The Taliban government could make separate arrangements so they can get education in a better environment, he added.

“They appreciated this and assured us that they would soon open girls’ schools and colleges where they can get education according to the Sharia law,” the religious leader said.

He said they also told the Afghan Taliban that Pakistan’s development and welfare is dependent on Afghanistan and vice versa.

According to Maulana Tayyab, they advised the Afghan Taliban to work together for the development and betterment of the brother neighbouring countries.

“I can’t explain in words the way they respected us during this visit and kept us in high regard,” Maulana Tayyab recalled.

About the peace talks with the TTP leaders, he said their meetings went well and they were quite optimistic about the success of the peace process with them.

“They could not control their emotions when they met us and offered full support in the peace process. I asked them how can you come to Pakistan with arms. Are you coming for fighting or peace,” he said.

He said the Taliban told them that they would do whatever the religious leaders would ask them to do for the restoration of peace.

“They told us Pakistan is our home and we would love to return home. I told them that it doesn’t make sense that you are coming to your home with arms and they said they would not object to whatever you people decide,” Maulana Tayyab said.

About their demand related to the restoration of former Federally Administered Tribal Areas (Fata), he said he didn’t discuss it much as it was not related to Sharia.

“My job was to discuss issues related to Sharia and I am happy they agreed with what we told them,” he said.

When asked if they will visit them again for the peace process, he said it was not decided yet.