90% of fish consumed in Pakistan is contaminated, says WWF 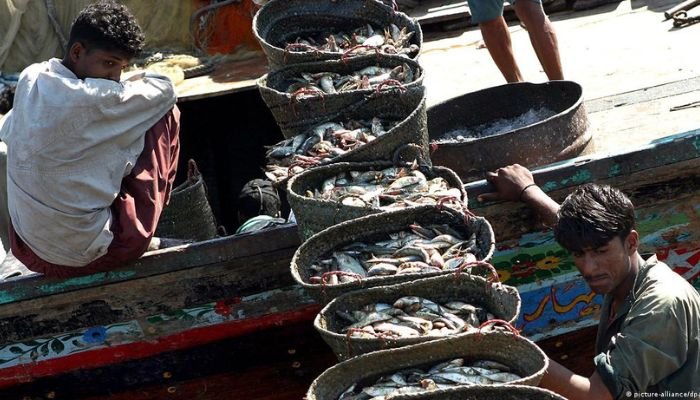 Approximately 90% of the fish consumed in the country is contaminated, putrefied, and unfit for human consumption, The News reported while citing a World Wide Fund for Nature’s (WWF) official.

Muhammad Moazzam Khan, WWF’s technical adviser on marine fisheries and former director general of the marine fisheries department, shared the assessment at seminar titled ‘Blue Economy: An Avenue for Development in Pakistan’ held at the Pakistan Institute of International Affairs.

Khan insisted that the large percentage of fish sold in shops and on roadside carts were unfit for human consumption. The speakers at the seminar shed light on various aspects of Pakistan’s blue economy, challenges it faces, marine fisheries issues, and the socioeconomic uplift of coastal communities.

“Fish are very delicate protein item and putrefy very quickly if not iced or frozen as soon as possible,” Khan explained. “Fish are usually kept at the room temperature and sometimes at above 40 degree Celsius and vendors sprinkle water on them to make them look fresher and keep them from decaying. But they have already become unfit for consumption, yet people buy and consequently, fall sick.”

He suggested that fish be stored between 0 and 5 degree Celsius to prevent it from rotting. The WWF representative pointed out Pakistan exported around 10 per cent of the produce and the rest was degraded or damaged as most boats lacked proper deep freezers and other facilities to store the catch.

He remarked that export of seafood in terms of volume is increasing, but still we are unable to achieve a large target due to a number of factors, including lack of proper processing facilities and low quality controls.

Khan lamented that fisheries remained a completely unregulated sector in Pakistan as the fleet size had increased tremendously unchecked. According to a survey carried out in 2016, the overall fleet size comprised 11,500 vessels, but now it was estimated to have topped 20,000, which needed to be cut down to 5,000 to 6,000 to preserve the fish resource, he said.

Vice Admiral (retd) Asif Humayun explained why the blue economy was a new frontier for Pakistan. Towards the end, he suggested a way forward to tap the full potential of the sea and marine resources to support the national economy.

He said Pakistan had three commercial ports, and the Port Qasim had emerged as the leading port in the country with an annual profit of over Rs90 billion as it handled 52 per cent of Pakistan’s total cargo.

The retired navy officer said that the Karachi Port Trust had also increased its capacity but its profitability was stagnant due to a huge debt burden and transportation hurdles within Karachi. Gwadar is a port for the future, Humayun said, adding it had a huge potential for transshipment, bunkering, ship repair and other facilities but it handled less than 80,000 tonnes of cargo every year.

The former vice admiral pointed out that the country’s ports were relatively inefficient with their cargo handling being slow, and the tariff was high. He called upon the maritime affairs department to look into these issues and resolve them so the ports could attract more transshipment cargo and transit trade.

After the withdrawal of foreign troops from Afghanistan, he maintained all Central Asian states had expressed their desire to use Pakistani ports for transit and transshipment of cargo.

Pakistan had about 22,000 registered seafarers while currently about 6,000 personnel regularly sailed in the sea, he said and added that most of those seafarers were employed by foreign ships because Pakistan had only 11 ships.

Saeed Baloch, the general secretary of the Pakistan Fisherfolk Forum, lamented that fish used to be a cheap and clean source of protein for the poor coastal communities but it were turning into a luxury item due to rising cost. “Ninety per cent of the fishing boats have become motorised and use fuel. Rising fuel prices have pushed up the cost of fish and related products,” he remarked.

Baloch said the fishing community helped the country earn forex up to 300 to 400 million dollars annually through the export of seafood but it was unable to increase the exports because their own lives weren’t improving.

Talking about obstacles to increasing the volume of fish being produced in Pakistan, he said no comprehensive policy had been devised yet to govern the fisheries sector. Baloch lamented that successive governments devised no policy to improve the lifestyle of fishing communities living in decades-old environment without basic amenities such as potable water and drainage systems. He also discussed the issue of sea pollution due to enormous discharge of untreated effluent into the sea.