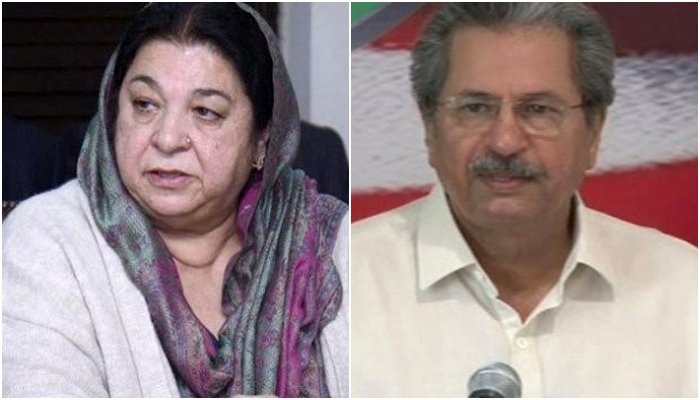 PTI’s Yasmin Rashid and Shafqat Mahmood were among party leaders declared innocent in a report submitted by police on Friday to the Anti Terrorism Court in Lahore in a case pertaining to vandalism during the party’s May 25 Azadi March.

The two PTI leaders, along with Mian Mahmood-ul-Rashid, Andaleeb Abbas, and Jamshed Cheema reached the ATC at around 8am today. A session of the court had convened to hear their bail pleas in the case.

In all, 14 leaders of PTI who had been booked for allegedly putting up resistance against law enforcers and damaging state property, approached the court for bail.

According to a report by Dawn, a first information report (FIR) was registered at Kohsar police station over the complaint of Sub-Inspector (SI) Asif Raza under Sections 109 (abetment), 148 (rioting armed with deadly weapon), 149 (unlawful assembly), 186 (obstructing public service), 188 (disobedience), 353 (assault on public servant), 427 (causing damage) and 435 (mischief by fire or explosive substance with intent to cause damage) of the Pakistan Penal Code.

Multiple other FIRs were also registered under the same sections.

Later, police added Section 7 of the Anti-Terrorism Act (ATA) to the first information report (FIR) of a separate case which was registered at the Bhatti Gate police station.

The police abolished the anti-terrorism provisions in the report submitted to the court today, declaring the PTI leaders innocent.

“The arrest of the suspects is not required,” the police report stated.

Following the report’s submission to the court, the PTI leaders withdrew their bail pleas.