Very unforuntate that everything in country happening over one appointment: Imran Khan 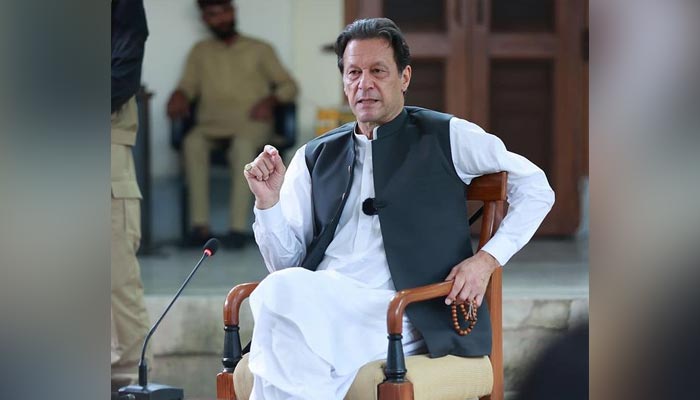 ISLAMABAD: PTI chairperson Imran Khan Saturday connected the current situation in Pakistan to the chief of army staff’s appointment, terming it “unfortunate” that everything in the country was happening over one appointment.

In a conversation with social media influencers in the federal capital, the former prime minister said that the army chief should be appointed on the basis of merit.

“A drama begins on the appointment of army chief which does not happen in any part of the world,” said the PTI chief.

He said that the army cannot unite a country single-handedly, adding that “if the army could unite the country, Pakistan would not have been divided” in 1971.

He continued to say that the “neutrals” cannot pressurise the PTI in accept the incumbent “mafia government”.

Rejecting dialogue with the coalition government, Khan said that he will not talk to corrupt people. “To sit and talk with corrupt people is to accept their corruption,” he added.

He claimed that the PTI is the only national party in the country right now, adding that he will not take any decision that is not in the country’s interest.

Reiterating that transparent elections are the only way to stabilise the situation, the ex-premier said that he will give the tickets for the upcoming elections himself.

“We took the Punjab government back so we could remove Hamza Shahbaz as the chief minister,” said Khan.

The PTI chairperson alleged that a conspiracy is being hatched to pit the party and army against each other, warning that there will be bloodshed in the country in case of any clash.

Talking about Shahbaz Gill’s alleged torture, Khan called its a “classic example of fascism”. He also announced that he would discuss significant matters during the rally today.