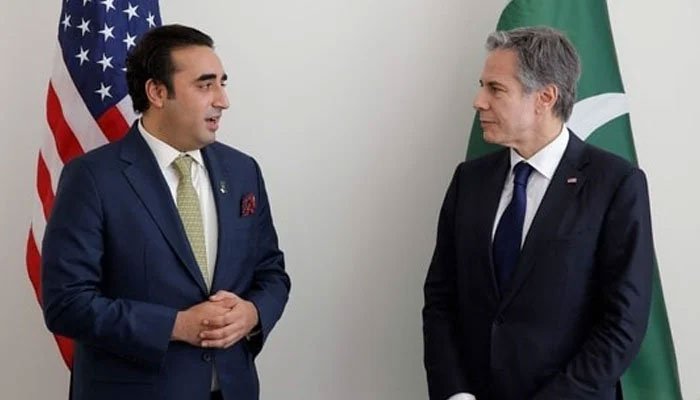 The US government has announced it will offer another $10 million to Pakistan for the food security programme, Geo News reported Tuesday.

Foreign Minister Bilawal Bhutto-Zardari called on his US counterpart, Antony Blinken, at the State Department building in Washington. The two leaders discussed bilateral ties and issues of mutual interest.

Bilawal, holding a joint press conference with Blinken following the meeting, said that diplomacy has come back again between the State Department and the foreign ministry of Pakistan.

“It is indeed true that diplomacy is back between the US State Department and the foreign ministry of Pakistan,” he stressed.

The foreign minister said that Pakistan seeks help and cooperation from the US on climate justice. It was time for the green revolution to take place, he said, hoping that US President Joe Biden would lead it [the green revolution].

“Pakistan has experienced a climate catastrophe of biblical apocalyptic proportions,” he said.

“It rained from mid-June to the end of August in Pakistan. The rain finally stopped and a 100-kilometre lake was formed in the middle of my country.”

As a result of massive downpours, a third of Pakistan is under water, he said. More than 33 million people—a number greater than the population of Australia—are hit by flooding, he noted. Of these flood victims, 16 million are children, he said.

He said that 1,600 people have already died in Pakistan, with children making up a third of those fatalities.

He noted that it is ironic that Pakistan, which contributed 0.8% to global carbon emissions, is one of the ten most climate-stressed nations on the planet. The foreign minister said his country looks to the US for assistance and support so it can get its people climate justice.

The Pak-US relation is not just resileint but the two natoins have stood thetest of time as well,” he said. “We proved throughout history that when we worked together we achieved great goals.”

The US Secretary of State said this is a very difficult time for Pakistan. The flooding will have long-term repercussions if the situation is not handled immediately, he warned.

He stated that the US stands with the people of Pakistan at this crucial time and added that 17 planes carrying aid for the flood victims had already left the country. Pakistan will also receive an additional $10 million for its food security programme, he noted.

The US Secretary of State said that Pakistan-US economic relations can be further bolstered.

Earlier, during the meeting with Bilawal, Blinken expressed grief over the devastation caused by flash floods in Pakistan and assured the minister of all possible support from the US.

The foreign minister thanked the US government for helping the flood victims.

The minister was joined at the meeting by Pakistani Ambassador to the US Masood Khan and Minister of State for Foreign Affairs Hina Rabbani Khar.

The minister appreciated the role of Doctors Without Borders in providing health facilities to the flood-affected people of Pakistan.

He said the MSF is playing a proactive role in providing healthcare facilities to the flood victims.

Hawken expressed deep sorrow over the devastation caused by the floods in Pakistan.