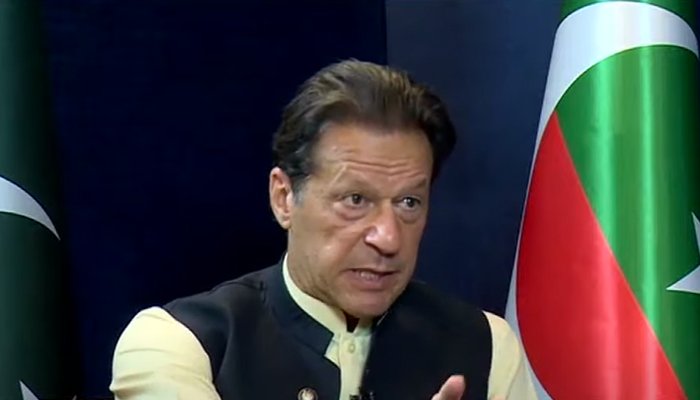 ISLAMABAD: PTI Chairman Imran Khan Monday said state secrets have been leaked to the country’s enemies as he claimed that the security line of the Prime Minister’s Office was breached.

Khan’s revelation came after several audio files — involving conversations of the previous and incumbent government officials — were leaked from the Prime Minister’s House.

“The secrets of the state have been leaked to our enemies. There has been a violation of the security line of the Prime Minister’s Office. The security agencies must be questioned about who is responsible for this,” he said during an interview with a private television channel.

Terming the leaks a “massive violation of security”, the PTI chairman said the prime minister — given his position — talks about the state’s secrets and now, “all those things have been leaked to our enemies”.

Khan claimed that an “audio tape” of the conversations was recorded at the PM’s House, adding that not only the tapes recorded during his tenure were leaked but audios of Prime Minister Shehbaz Sharif have also been leaked.

“Our intelligence agencies should think about what they are engaging themselves in. They are making people feel threatened,” he said, telling them that “political engineering” was not in their job description and that they were tasked to keep the country safe.

The former prime minister also recalled that his residence’s security line was also breached and the conversation of his wife, Bushra Begum, was leaked as well — where she could be heard speaking to PTI leader Arslan Khalid.

Several audios have been leaked online in a span of eight days — three of the incumbent government and two of PTI.

The first was leaked last Saturday, which allegedly featured PM Shehbaz Sharif and a senior official. It contained a discussion regarding PML-N Vice President Maryam Nawaz asking for a power plant from India to be imported for her son-in-law.

Later on Sunday, two more audios were leaked on social media. One of them was related to a discussion about the PTI’s resignation and another was about former finance minister Miftah Ismail.

The first audio related to PTI was leaked on September 28, in which former prime minister Imran Khan allegedly told his then-principal secretary Azam Khan to “play” with the US cypher.

In the latest audio, the then-prime minister Khan, ex-minister Asad Umar, and the then-principle secretary Azam could allegedly be heard discussing the US cypher in a meeting and how to use it in their interest.

Following the back-to-back leaks, the National Security Council (NSC) approved the formation of a high-level committee under the leadership of Sanauallah to investigate the matter of the audio leaks.

In its meeting just a day after, the federal cabinet also endorsed NSC’s decision to conduct a thorough investigation into the issue.

Khan on the cypher

Commenting on the issue of the ongoing cypher controversy, Khan said that its master copy is lying in the Foreign Office.

“They [government] should first ask the Foreign Office about the cypher’s master copy,” the former premier said, adding that the master copy first arrives at the FO and its copies are then sent to the Prime Minister’s house, president, and the chief of army staff.

He added that President Arif Alvi sent the cypher’s copy to Chief Justice Umar Ata Bandial and that his party had sent one copy to the National Assembly speaker.

“What cypher are they talking about being stolen?” Khan questioned the government, adding they “initially lied” that there is no cypher.

Khan added that the PTI government had declassified the cypher during the last cabinet meeting.