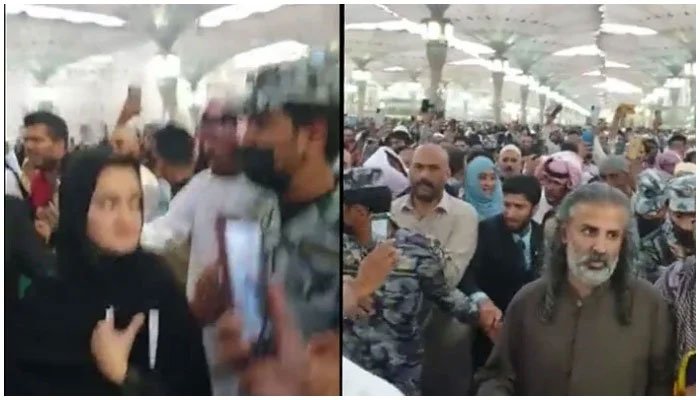 ISLAMABAD: At least six Pakistani nationals have been convicted of violating the sanctity of the Masjid-e-Nabawi (PBUH) in Madinah during Prime Minister Shehbaz Sharif’s visit to Saudi Arabia, diplomatic sources told Geo News on Thursday.

Officials, privy to the development, told Geo News that a court in Madinah gave three Pakistani nationals — Anas, Irshad, Muhammad Saleem — 10 years of jail term, while the other three — Khawaja Luqman, Muhammad Afzal, and Ghulam Muhammad — have been given eight-year sentences.

Apart from the sentences, a fine of Saudi Riyal 20,000 each has been imposed on the convicts and their mobile phones were confiscated, as well.

In April, during premier Shehbaz Sharif’s visit to Saudi Arabia, a group of protesters, allegedly belonging to the PTI, violated the sanctity of the Masjid-e-Nabawi in Madinah after they loudly chanted slogans against the PM and his delegation as soon as they entered the mosque to pay their respects at the Roza-e-Rasool (PBUH).

Upon the arrival of PM Shehbaz and his delegation to the mosque, the protesters started chanting slogans of “chor, chor (thieves)” when they saw the premiere and harassed and raised objectionable slogans against Marriyum Aurangzeb.

Videos of the unfortunate incident had gone viral on social media.

The protesters also misbehaved with the JWP chief and federal Minister for Narcotics Control Shahzain Bugti and pulled his hair.

The protesters continued to film the entire episode with their mobile phones.

Following the incident, political and religious leaders and people belonging to different sections of the society also expressed their outrage at the incident and strictly condemned the chanting of political slogans at Masjid-e-Nabwi.