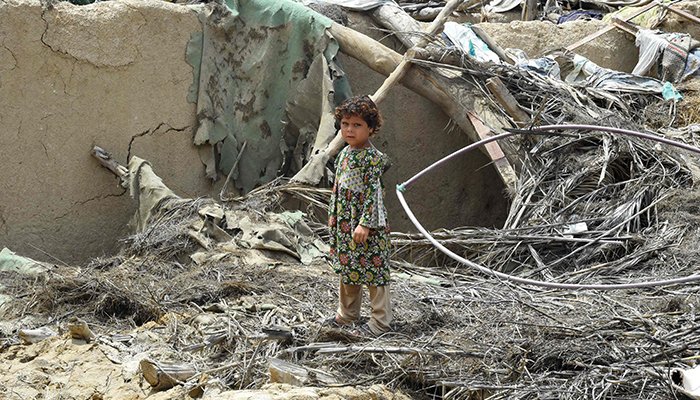 QUETTA: The ongoing monsoon rains continued to wreak havoc in Balochistan, with flash-floods in Qila Abdullah and several other areas killing as many as six people and inundating a number of villages overnight.

According to Provincial Disaster Management Authority (PDMA), Balochistan, the number of rain-related deaths has reached 182 in the province and several villages have been submerged in floodwaters.

Three dams have washed away and many link roads have been destroyed in Qila Abdullah.

The train service between Chaman and Quetta has also been affected due to floodwater in the area, while scores of cattle head have perished and crops and orchards ruined.

The traffic between Quetta and Karachi was also suspended as the linking highway had been damaged in different areas of the Lasbela district.

According to Commissioner Kalat Division Dawood Khilji, the recently established alternate route at the Landa area of Uthal on the National Highway was washed away by flood on Friday.

He appealed to the public to avoid travelling on the Quetta-Karachi highway.

The PDMA rescue teams are present in the area and are providing rescue services to people stranded in flood-hit areas, the official said.

He contacted the public representatives and district administration officials of the flood-ravaged areas directing them to visit the affected areas and provide all possible help to the affectees.

Despite the passage of more than a month, the government has not yet been able to provide relief to the people affected by floods as bureaucratic hurdles come in the way.

Flood affectees have accused the administration of treating them in a derogatory fashion during the distribution of rations by asking for original computerised national identity cards (CNICs).

The officials are reportedly seeking the CNICs for verification purposes, but the affectees have stated that they lost everything when their homes were flooded.

“Ration comes for us but they ask for CNICs. We did have some cards but not for everyone. How can a family of 10 survive on one card’s ration?” one of the victims from Lasbela told Geo News.

The victim appealed to the administration to resolve this issue, adding that if they feel they are lying, they can survey their homes to determine the number of people in a household.

“We are standing here for ration. We have not received anything [but] they are pushing us out. We can talk to the tehsildar when we go inside,” another victim told Geo News.

The woes of Balochistan are far from ending as the Pakistan Meteorological Department (PMD) has forecast more rains not only in the province, but also in Sindh and South Punjab.

The Met Office, in a statement, said that depression has developed in Arabian Sea which is likely to move towards the west along the Makran coast.

Due to this weather system, monsoon currents are continuously penetrating in southern parts of the country. Another low pressure (LPA) is likely to approach Sindh on 16th August.

Under the influence of this weather system, widespread rain-wind/thundershowers — with scattered heavy to very heavy falls — are expected in Sindh and Balochistan from August 16-18 with occasional gaps.

“All concerned authorities are advised to remain alert and to take necessary precautionary measures during the forecast period,” the meteorological department said.